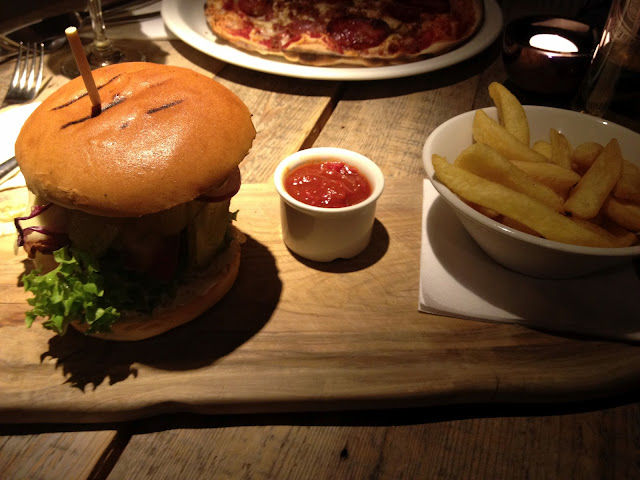 View BurgerAddict23 in a larger map

I found this pub whilst driving on a Saturday night with my mrs after the place we initially intended on going was fully booked. It looked like a nice place to eat and the menu had a burger on so I was sold.

They have two options of burger. A Classic Burger(Onion, Gherkin, Mustard Mayo, Cheese, Relish) or a Family & Blue Burger(Gorgonzola, Mushrooms) priced at £11.95 and £12.95 respectively. I went for the classic, the mrs went for a pizza.

It was about a 30 minute wait for the burger after our starter which seeing it was relatively quiet in there was too long. When it arrived however it looked as though the wait had been worth it. It arrived neatly presented on a wooden board with the relish separating the burger and chips. The waiter advised that more chips were on the way as I had not received the correct portion. This was a bonus as the portion size didn't seem too bad.

The gherkin looked great creeping out the side of the bun and I was expecting good things - I went for a cut through to see the burger in more detail. - I was wrong. 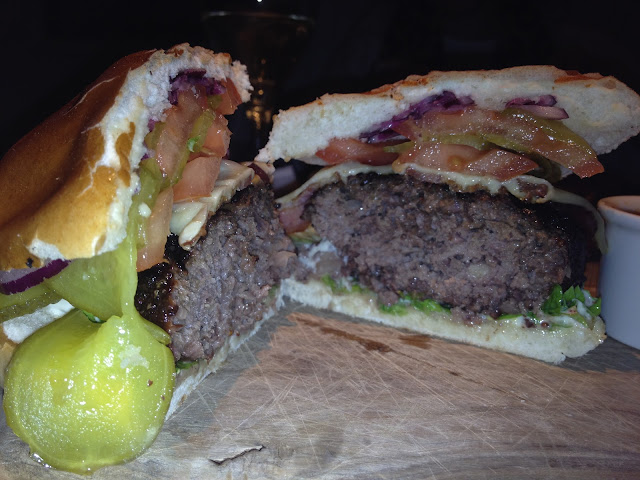 MEAT - As you can see the beef had the life cooked out of it, I did ask for medium rare, I think they missed it...slightly....a lot! The patty was also miles too big for the bun and for my mouth. It was overly burnt in some parts and had no flavour.

BUN - Promisingly soft, firm and nicely toasted however with the meat being so big in comparison it stood no chance. Shame. 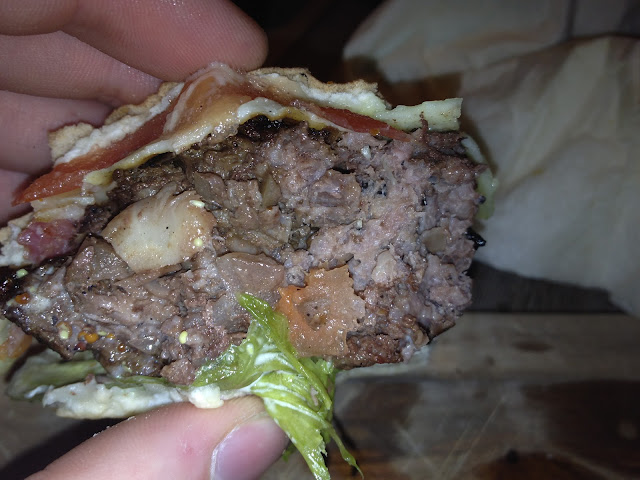 TOPPINGS - The salad was tasty and fresh however as you can see from the 2nd burger picture, the tomatoes were stacked up which made for a uncomfortable experience, like tying to grab an ice cube as tight as you can, with wet hands, in a bath. Just didnt work.

SIDES - Ah yes, remember them extra chips that were coming......
....
....
They never came. Wasn't too disappointed as they were lacking flavour and when I mentioned the extra chips that never came they sent over the manager and he said he would comp a desert instead so was happy with the trade and we ordered our deserts.

I went to freshen up quickly and was rather embarrassed when my mrs advised the manger had come back over to let us know only 1 of the deserts would be on the house and were we ok to pay for the extra one we ordered.

Guess what, when the bill arrived both deserts had been charged! I then had to wait at the bar whilst the manager had to come to take it off the bill.

I tasted the mrs's pizza was it was very good, people at the bar paying were also talking about the quality of pizza so all is not lost for The Dukes Head!

The bun toppings and meat were all so foreign to each other and with the quality of their pizza it may be worth taking the burger off the menu till the quality is somewhat comparable.