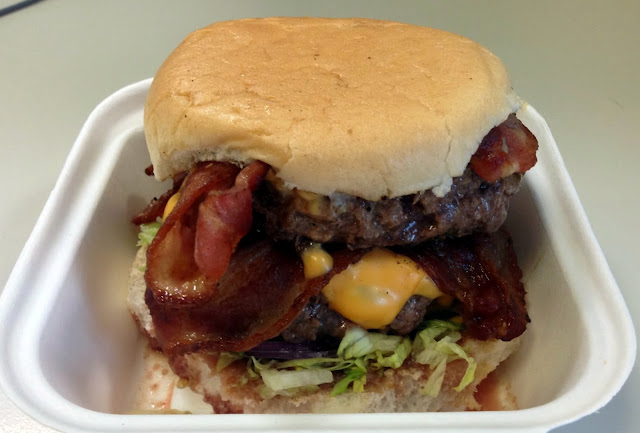 A burger that would have satisfied Goldilocks and the three bears

Long before Burger Bear won the EatMeUp burger battle he had been on my to-do-list but it was an act of kindness I saw on twitter that pushed him to the very top.

Original Fry-Up Material breakfast food truck had broken down around Old Kent Road and Burger Bear Tom not only offered assistance, when a cheeky request for tea and burgers came, Tom answered it.

Located on a side road just off of Old Street it's quite easy to walk past this; I had my iPhone directing me and I still managed to just over shoot it.

Excellent graffiti art covers the walls around his food stall, when I visited I think this was the only stall erected (however I may be wrong as I was chatting to Tom about burgers we enjoyed around London currently) there were a good few benches to eat on however I had to get back to work so this wasn't an option. 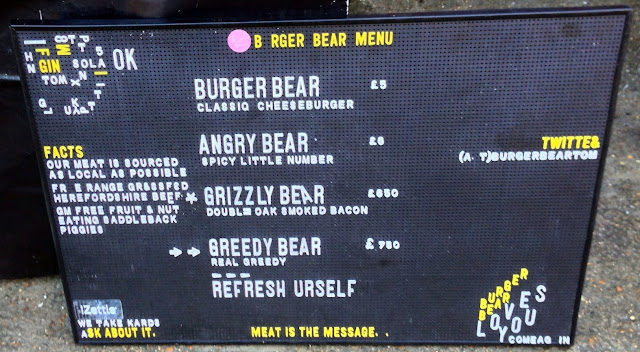 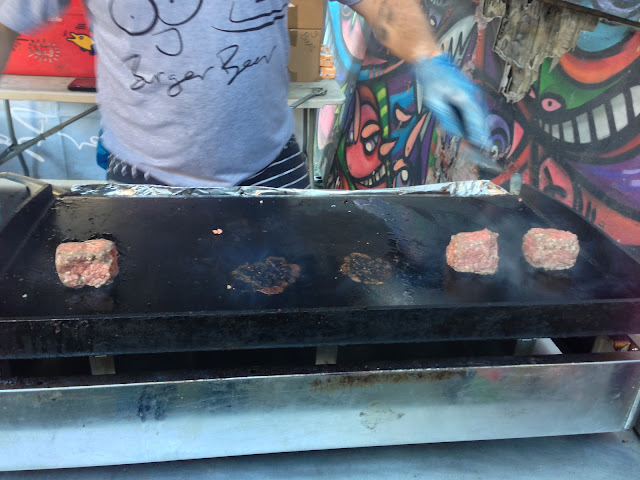 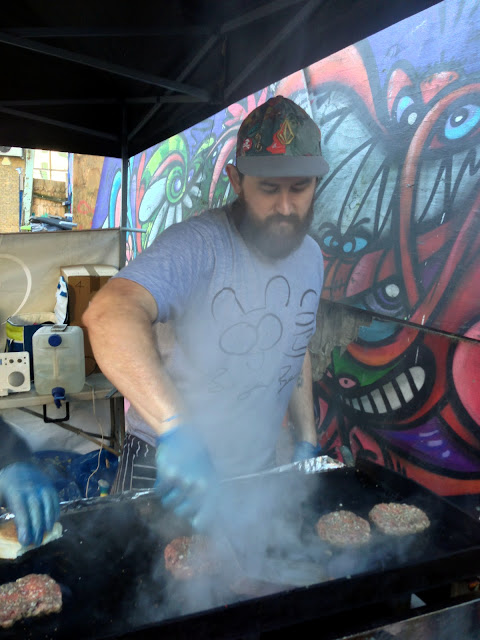 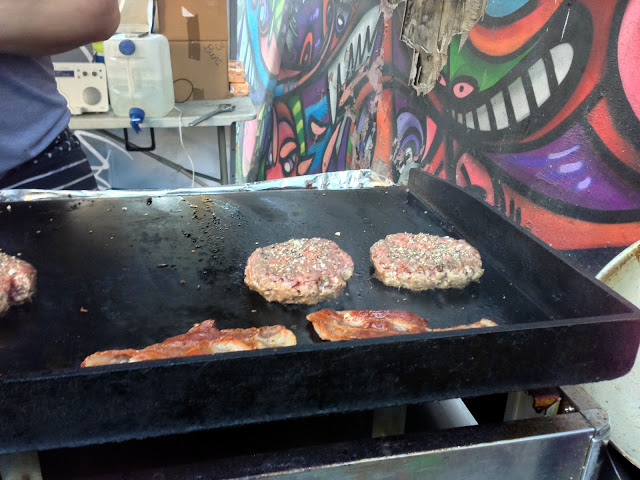 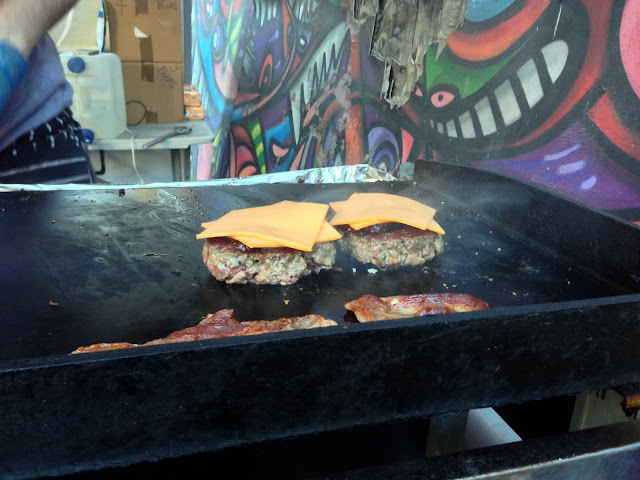 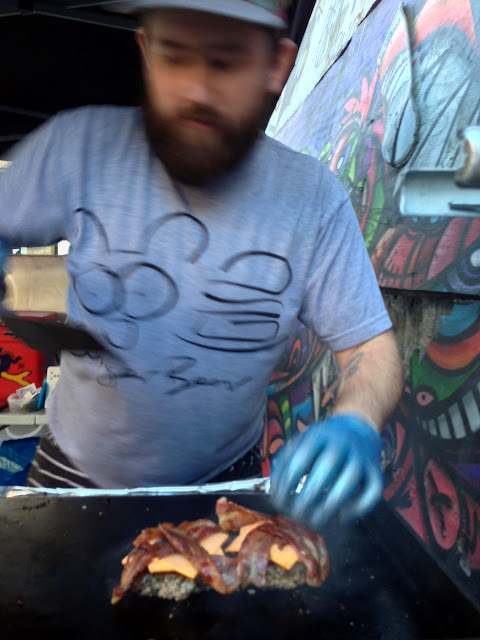 I went for the Greedy Bear burger which is double patty, double jam, double cheese and double the bacon; it sounded like this would have been enough for Goldilocks and the 3 bears.

An almost perfectly formed cubed patty is placed onto the grill before being flattened down and seasoned with salt and pepper. Once flipped a couple of times the jam is spread across the patty and then 2 slices of some of the thickest slices of cheese and bacon I'd seen placed on each patty across, steamed, stacked and placed into the bun where it sits on a bed of finely shredded lettuce, red onion and gherkins.

Again another rush back to my desk with burger in hand, so there is a chance for the burger to over cook and especially with a double for any structural weaknesses to be accentuated. 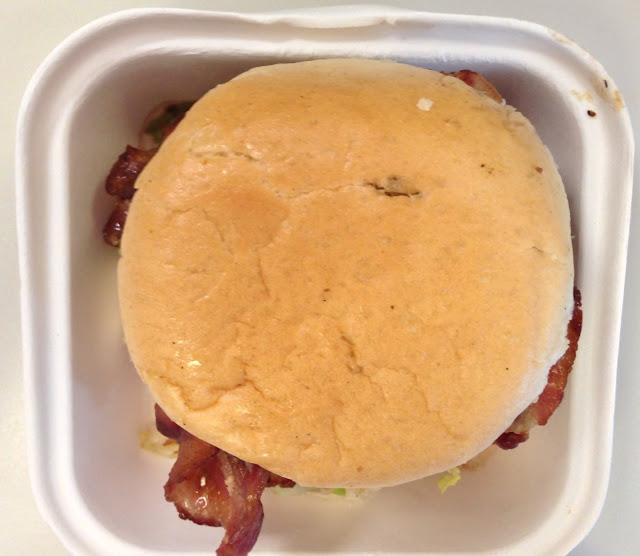 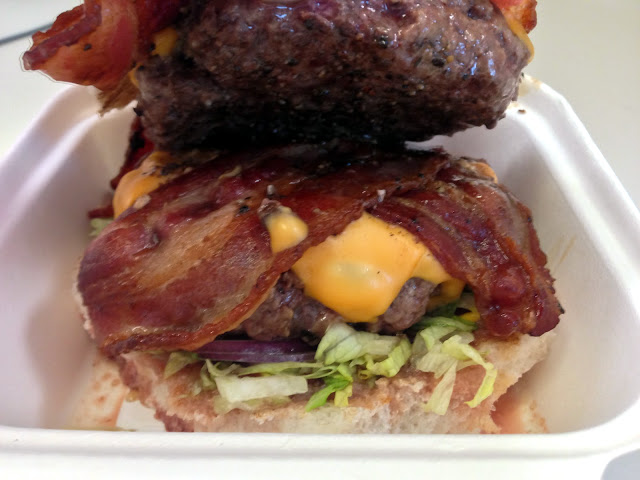 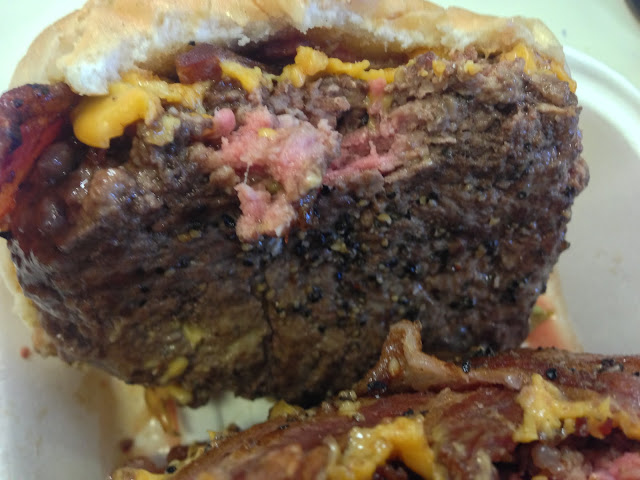 The burger is a monster, ever so slightly too big for a comfortable mouthful but a mouthful full of excellence.

The double beef patty is excellently cooked with a bite on the surface and a perfectly pink centre. Seasoned well with an emphasis on the pepper which I loved.

The thick gooey cheese is steam melted well but it's the jam that really is good. It gives a sweetness and heat throughout consumption which really is top draw. JAM JAM JAM!

The bun got tossed and squashed but still managed to last till the end; well played. 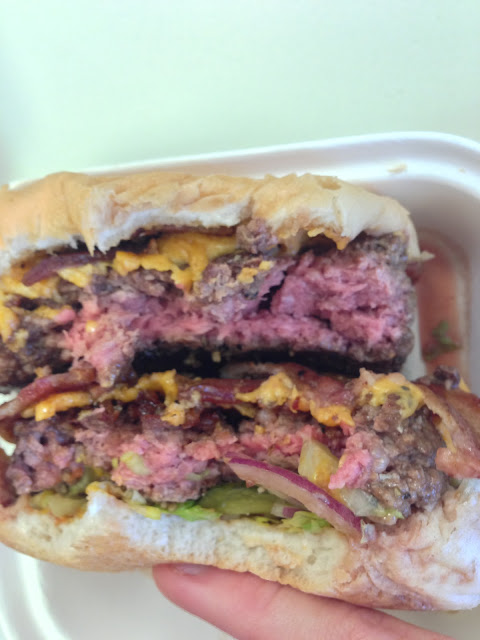 A scrumptious burger which only issue for me was the colossal size of it, but this is called a greedy bear for a reason. I can bearly wait to get back to try the single patty version as with a more manageable mouthful and less beef the ensemble of beef, jam and bacon is very exciting.

Burger Bear is rumoured to be at Red Market London for 3 days a week soon so add him on twitter to get the latest info.