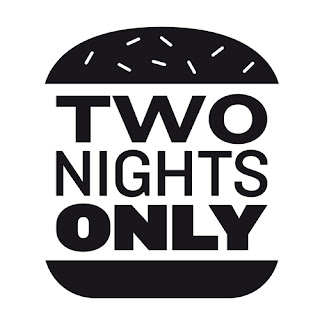 With new burger joints, specials and popups hitting your timeline daily, it's virtually impossible to keep track of everything. Thankfully, you have me - sorting the buyers from the spyers, the needy from the greedy and the ones I trust from the ones I don't - to inform you all of events that can't be missed. Two Nights Only is one of these events.

James Morgan, previous head chef at the Wenlock and Essex, and creator of the 30 burger, and Chris Todd, from The Diner, have teamed up once again to bring burger enthusiasts a night of pure indulgence. Unfortunately I was unable to go to the previous event but I managed to speak to Chris from All Things Meaty who attended and had this to say:

"2NO holds a special place in my heart as it was the first ‘foodie’ event I ever went to, and it was that night I decided to start a food blog. I didn’t write up a review of the place as honestly, I got hammered on the amazingly generous cocktails and chatted to too many people. Personally, even though the burger is incredible (can’t stress this enough if you’re a burger fan), the evening had a great atmosphere, the waitresses were lovely and overall it was just a huge amount of fun.

That said, I do still remember the food. The starters were a nice surprise, waygu tartar and a roasted crayfish. The ox tail doughnuts, which are making a comeback, almost stole the conversation away from the burger. The filling was excellent but people were divided by the icing sugar coating and the heaviness of the dough. Overall though, it went down as a huge success. The sides of coleslaw and fries were superb, hands down best slaw I’ve ever had. The brownie dessert was decadent but I was full to bursting after the burger.

The Burger (capital B) was a triumph of engineering. Urban legend was that over 100 people had been involved in the process. It was a pretty mammoth burger and overall was very similar to James’ truly excellent 30 burger at the Wenlock. However this was even richer and took the beefiness to another level. Every element was a bit more special as well. The comte cheese was sharp and mature, the onions were amazingly sticky and sweet and the gherkins had a yeasty kick due to their long alcohol bath. I actually had one and a half burgers (because I’m a pig) and I was still craving more. James, Chris and the rest of the team put on a great event last time, this one sounds like it’s going to surpass the last. Bigger, better and beefier. Can’t wait."

Take a look at the menu for this Two Nights Only: 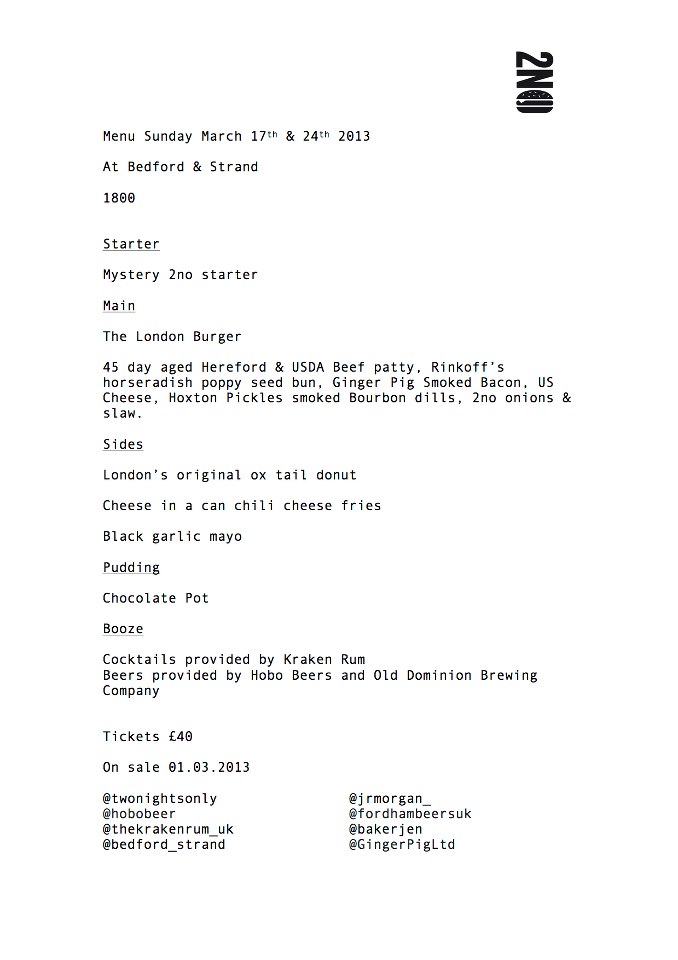 Bedford & Strand is located just off the Strand. Click here for map

The London Burger, if executed as well as James has shown in the past, looks set to be one of the best burgers you're likely to get your hands on and probably worth the £40 ticket price on its own, let alone the starter, sides, pudding and drink included!

Tickets are on sale this Friday. You really would be mad to miss out, so make sure to add me and Two Nights Only on twitter to be first in-line when they go on sale. I'll be going on the 17th March - maybe see you there.

Email ThisBlogThis!Share to TwitterShare to FacebookShare to Pinterest
Labels: 2NO, London, News