After coming into Santa Fe at dusk, it was great to be able to spend some time in the morning in this beautiful & unexpected treasure. We wandered in and out of the local shops and got to speak to people about America and our Route 66 trip. One of these was "The Shop", which is an all year round Christmas shop. The owner was a big football(soccer) fan and we chatted for close to an hour about The Arsenal, Barcelona, and his own month trip around Spain some years before. I thought our road trip was loose, him and his wife drove out of Madrid airport, no sat nav, no schedule, just "left or right". The stuff dreams are made off. 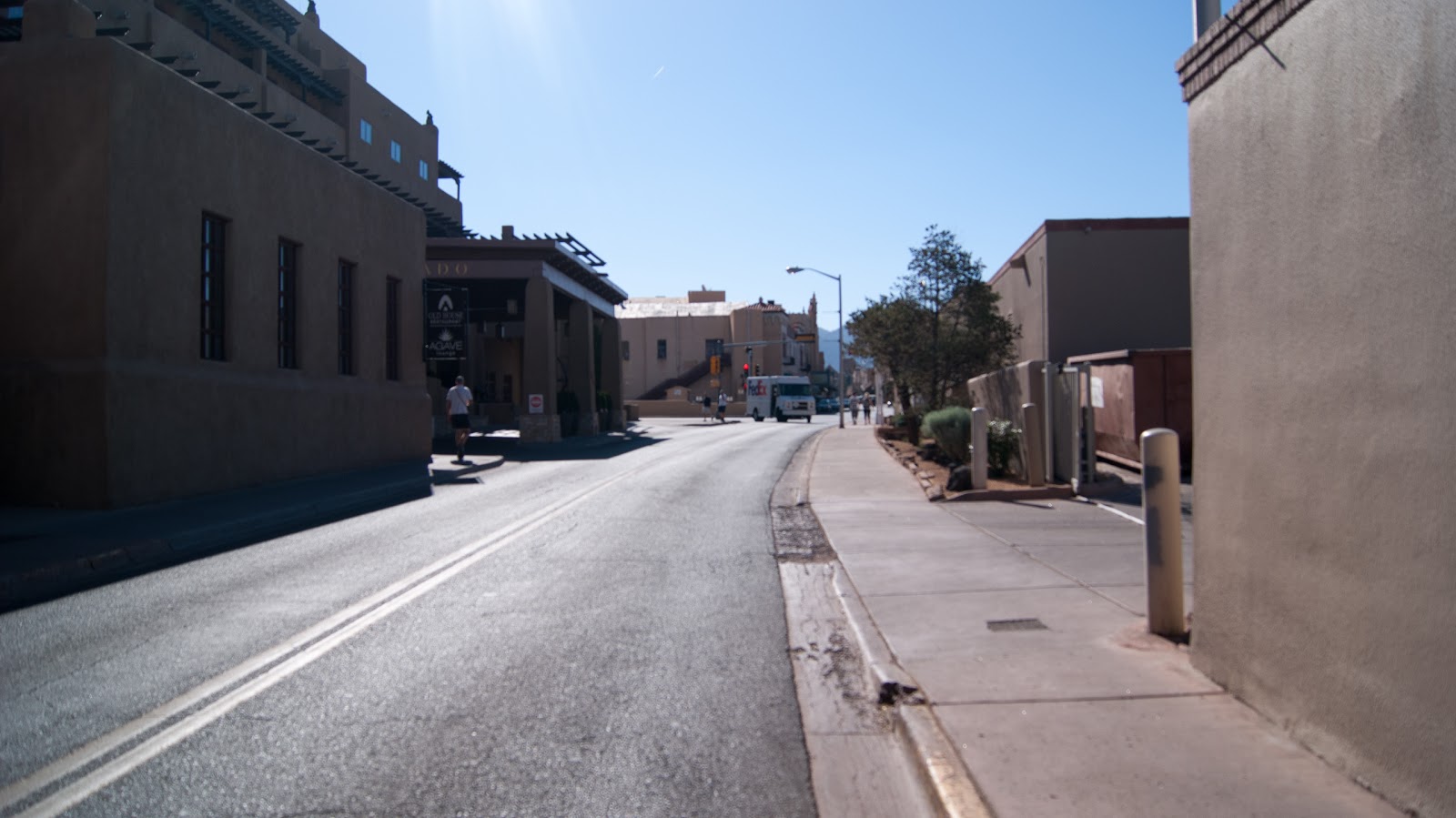 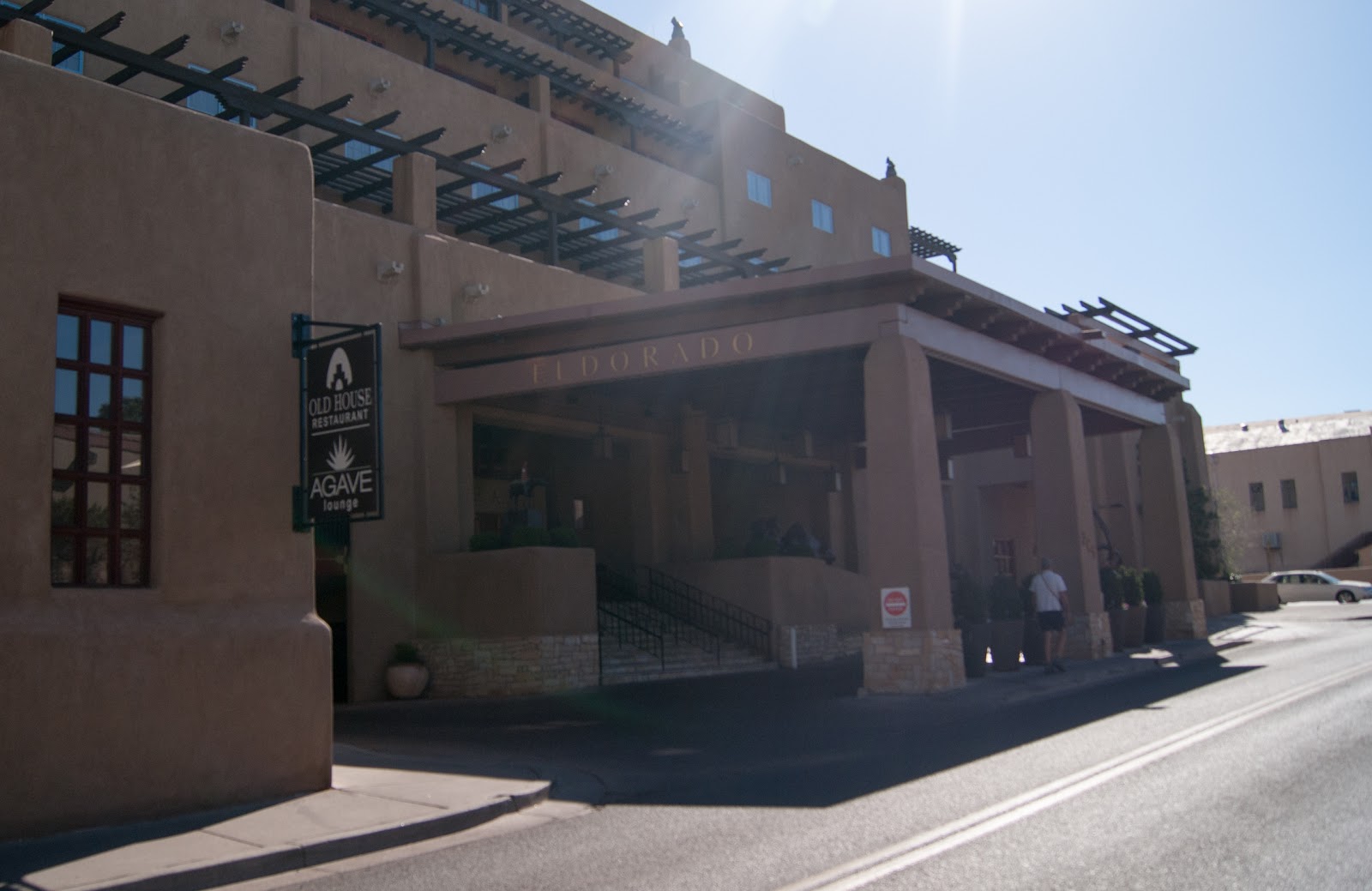 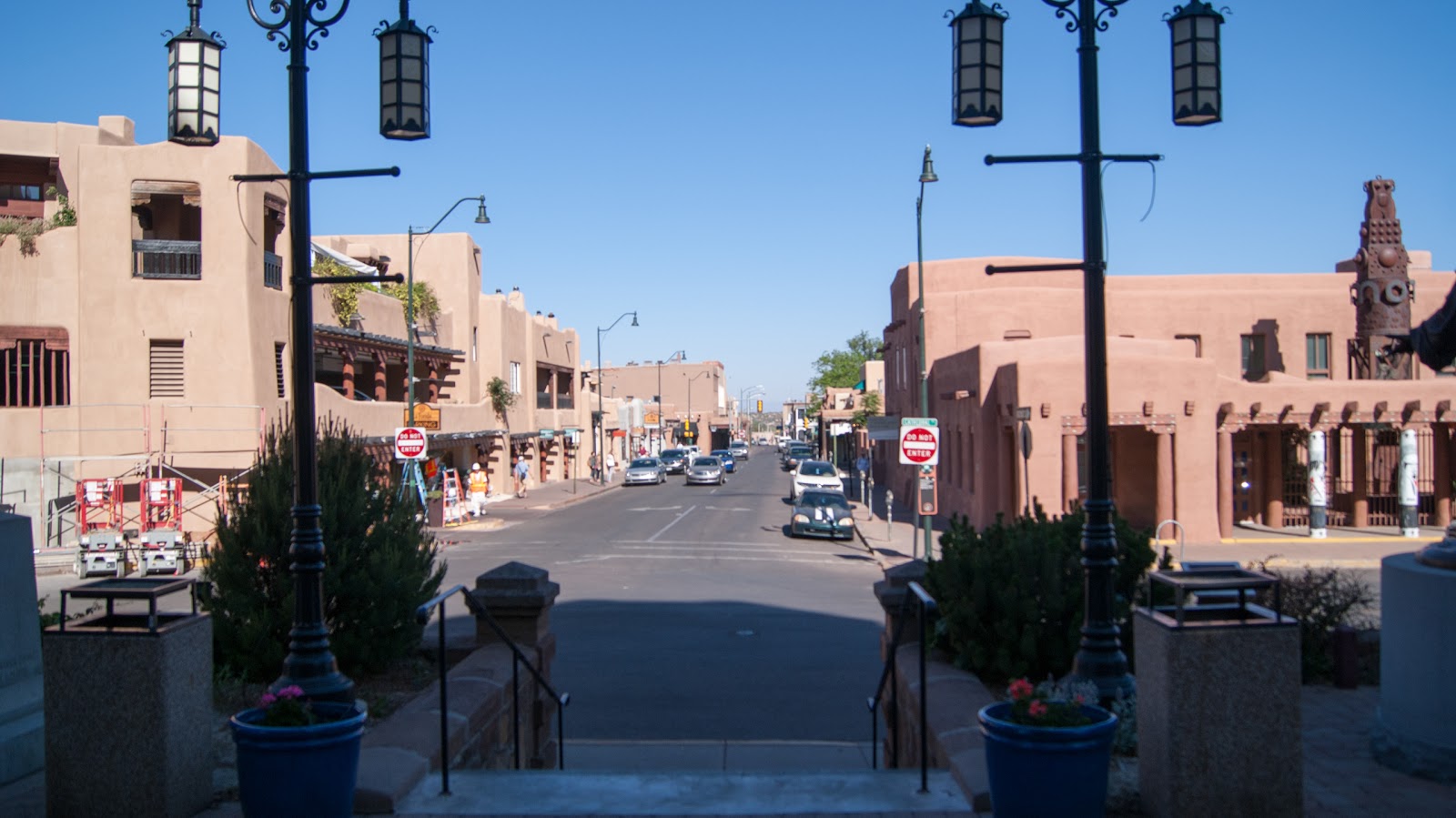 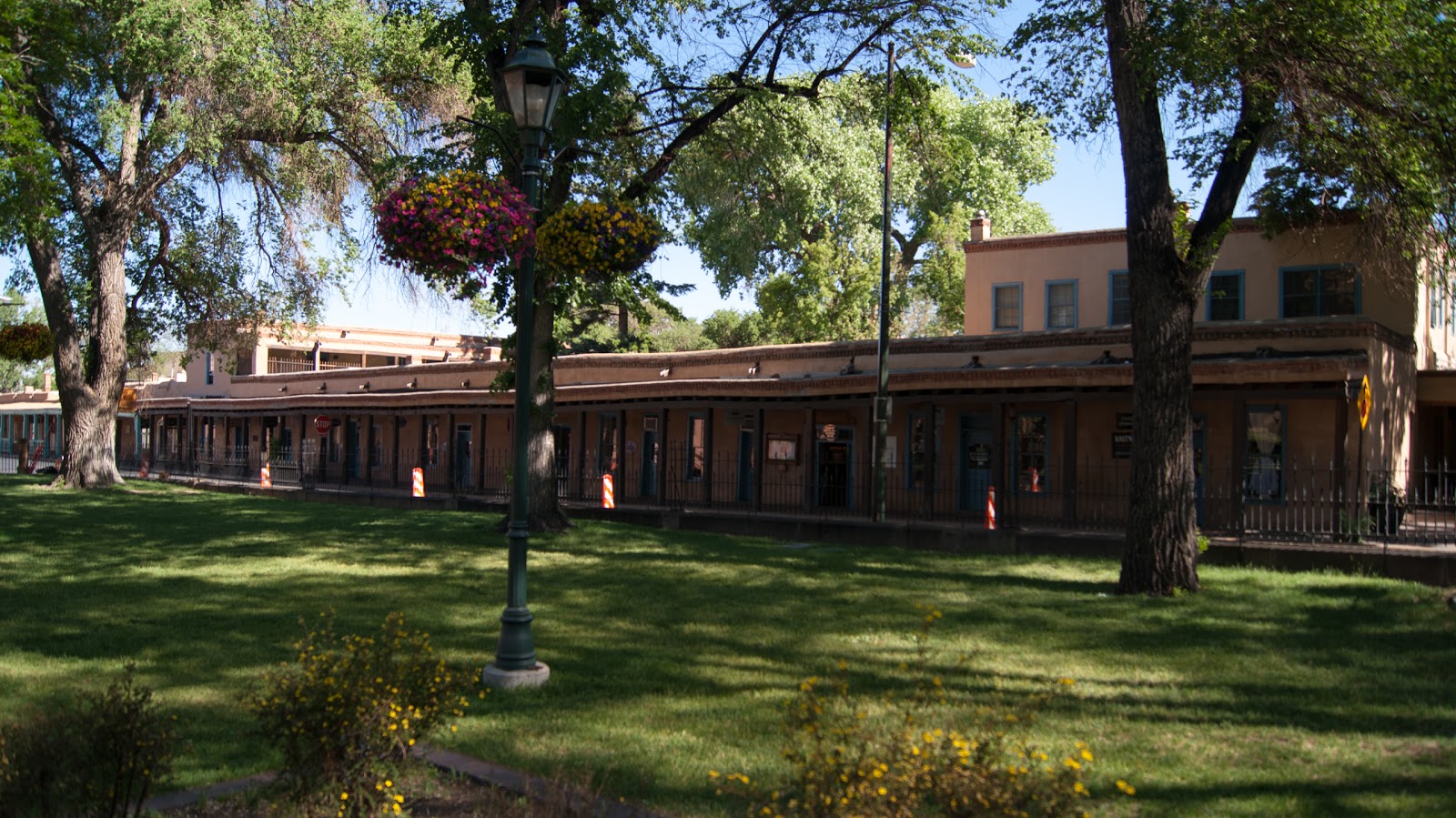 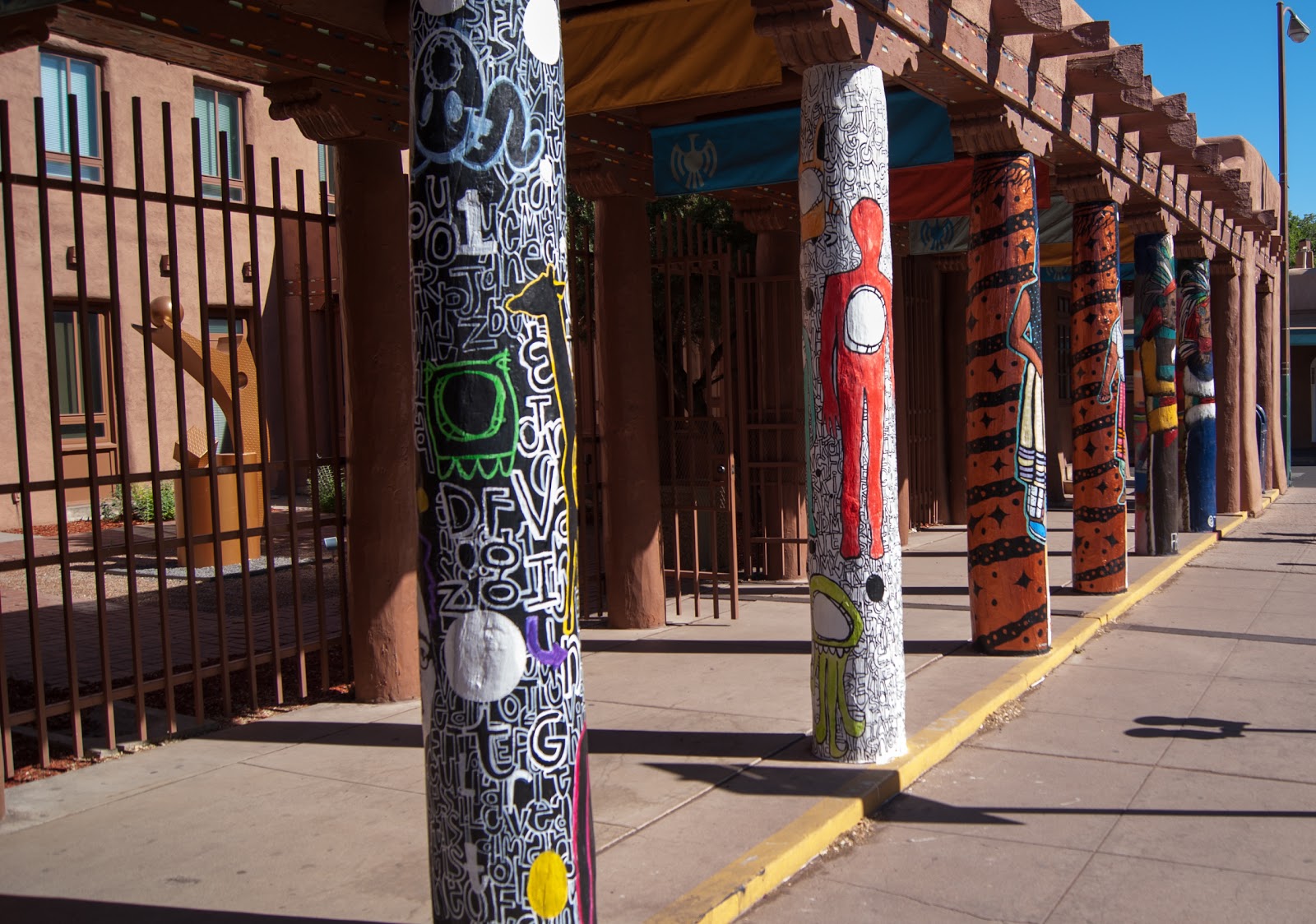 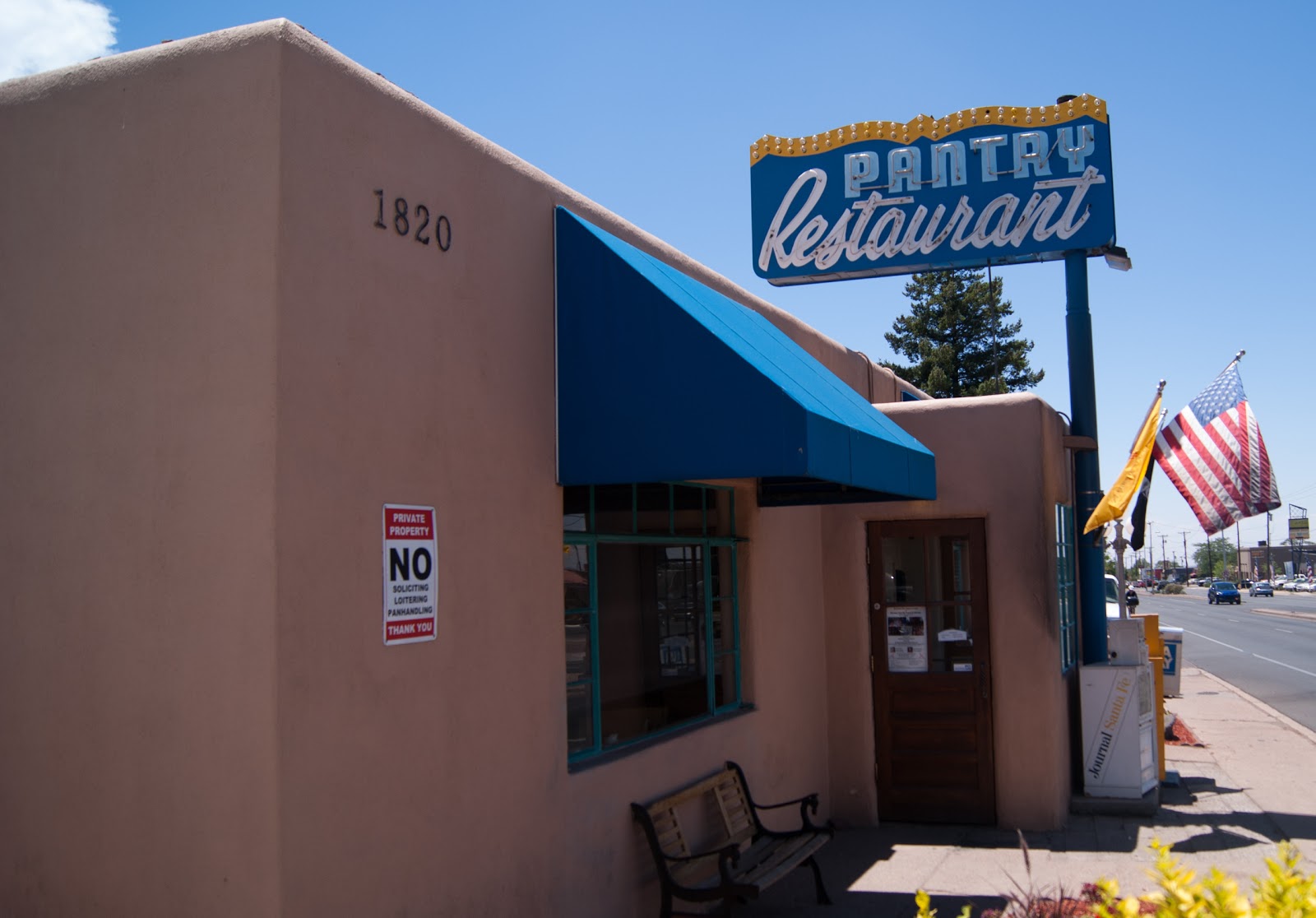 The Pantry is another family run Santa Fe restaurant, and has been producing 'fresh-from-scratch' food, on the original Route 66 since 1948. The Pantry was another burger recommendation from Hamburger America's George Motz, and he came up trumps again. 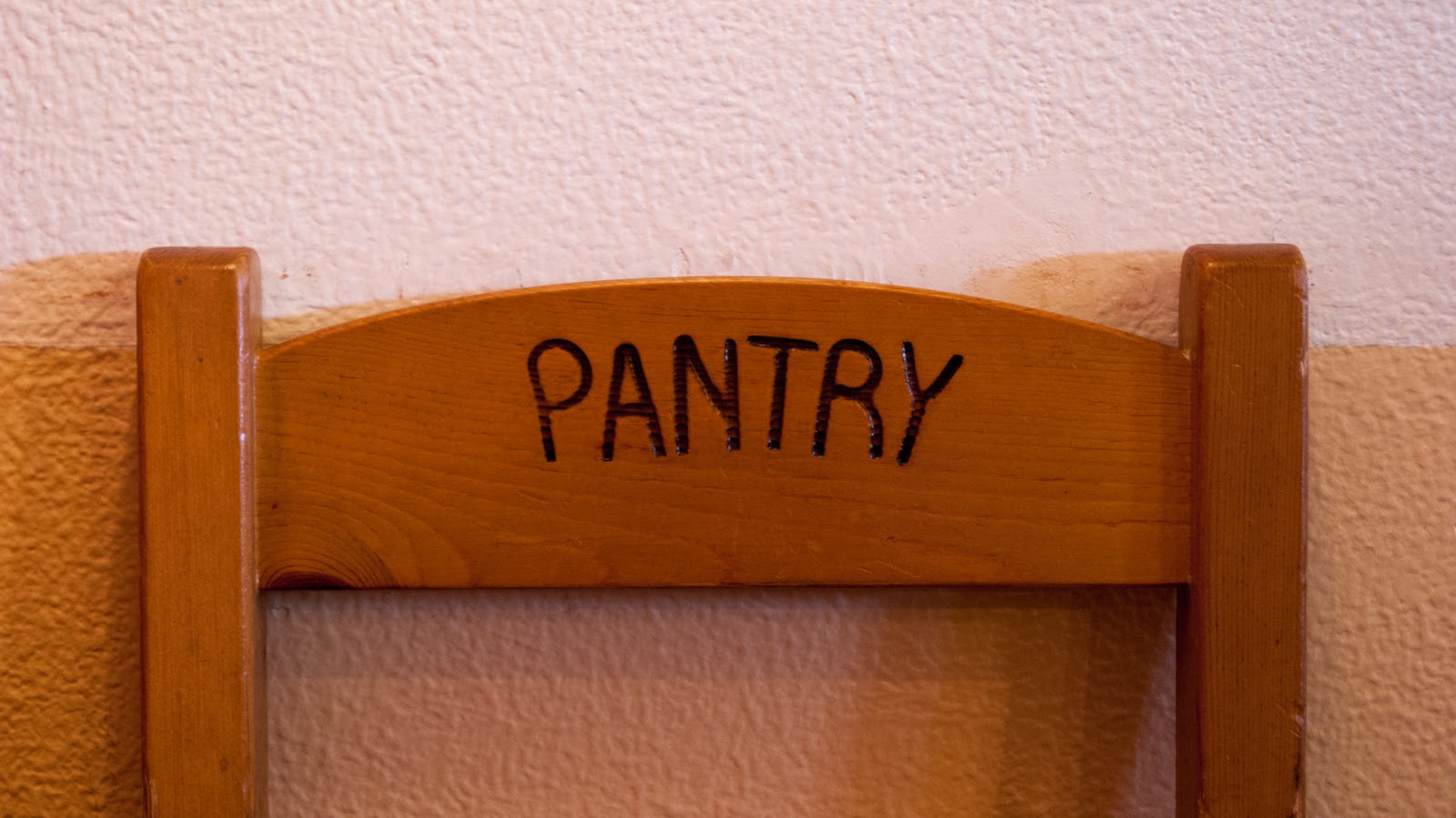 It being a tortilla burger, it'll be the second day in a row I've had to eat a burger with a knife and folk! There is no other way, so my 'rep' shall remain untarnished. 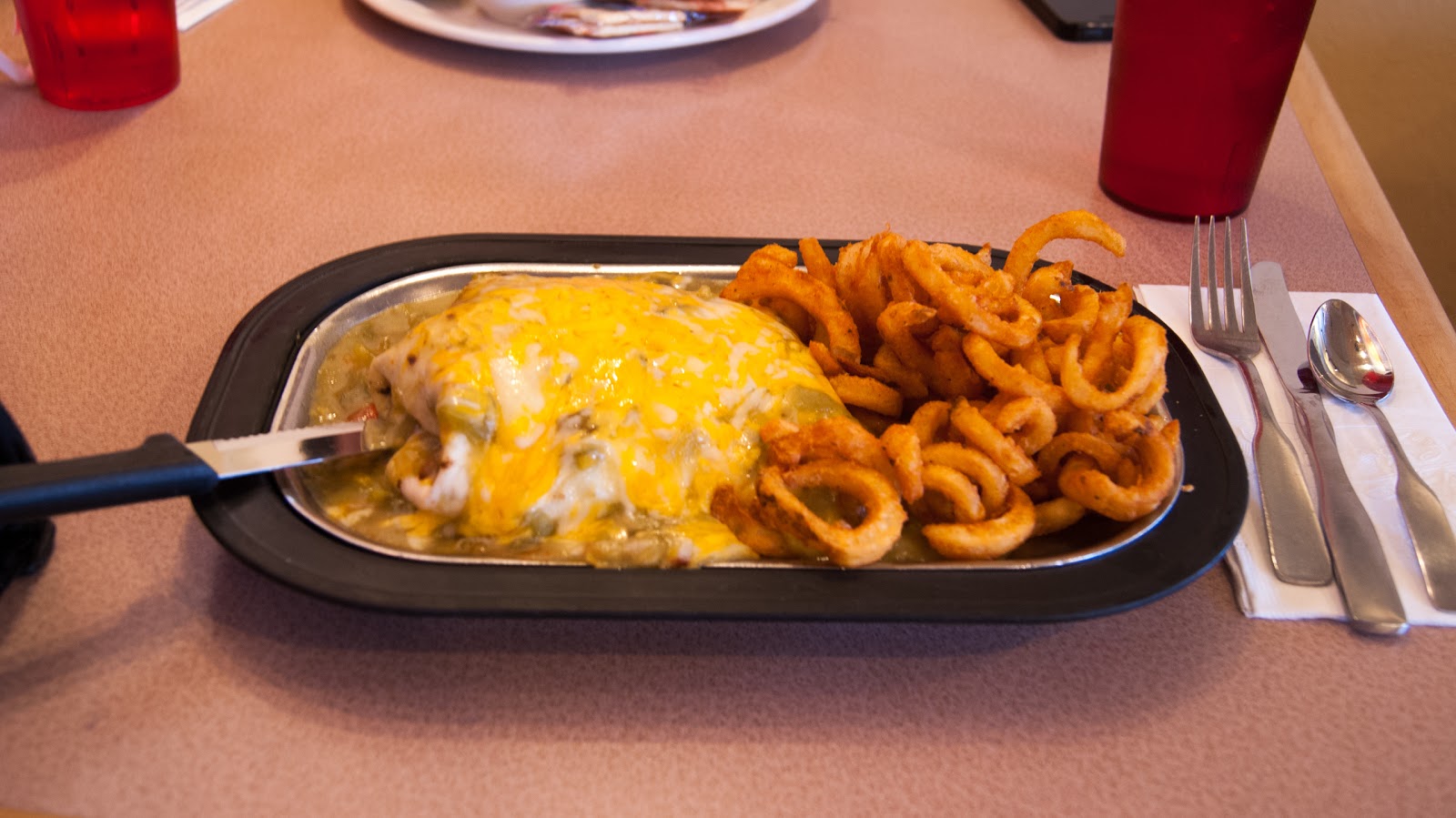 Under what looks like a mound of cheese there is a beef patty topped with green chili, and pinto beans all wrapped in a flour tortilla and then topped with melted cheese. 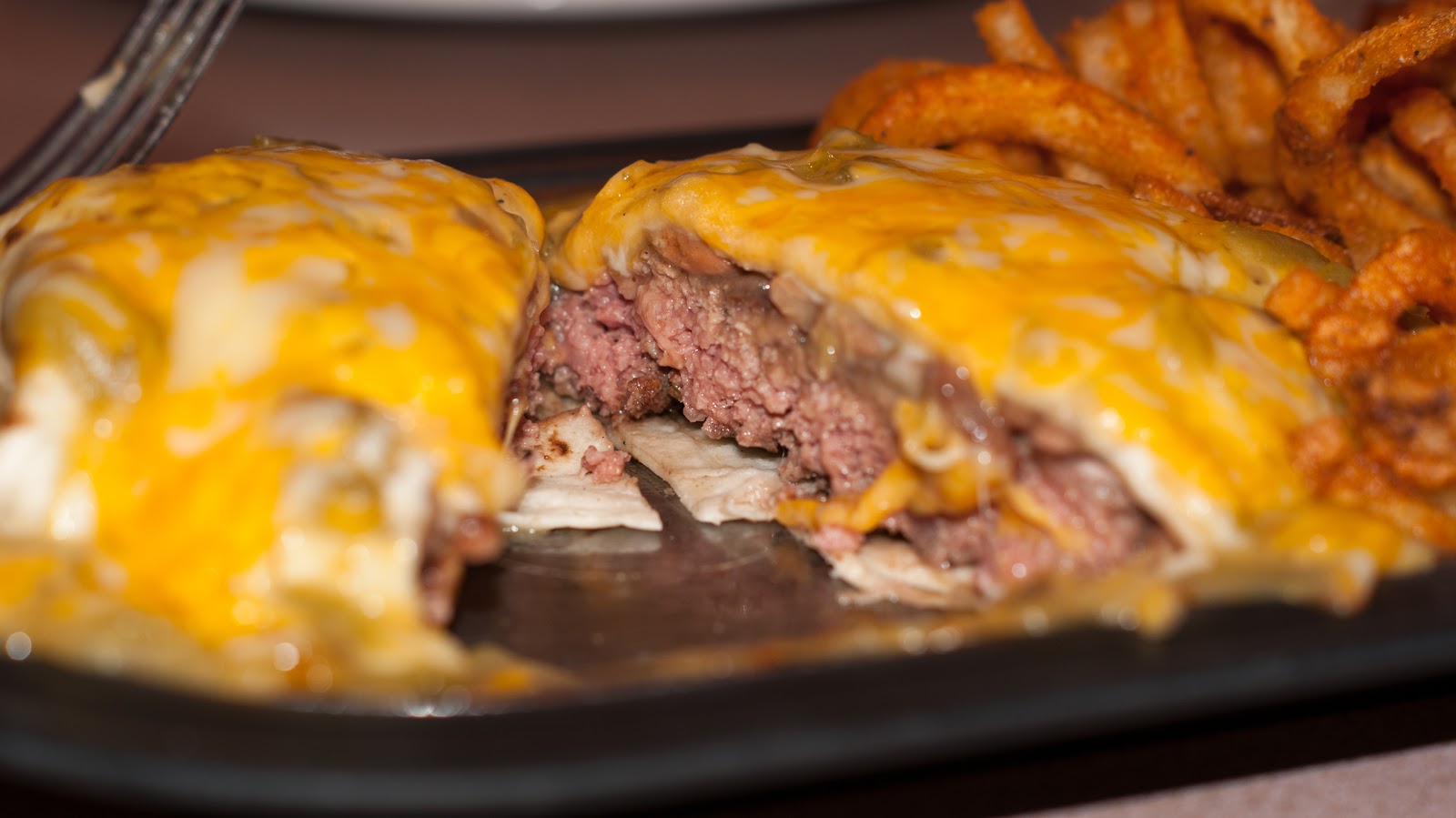 The earthy flavour from chili and pinto beans flow all the way through the burger. There isn't too much initial heat from the chili but it does build throughout, to leave a nice tingle on your lips. The patty is quite firm indicating a low fat content or overworking, which usually results in a dry, tough poorly tasting burger - but it was cooked and seasoned to perfection and still managed to be very juicy. With there being no bun the beef flavour really stands out, and with the toppings, gives you a very good burger. 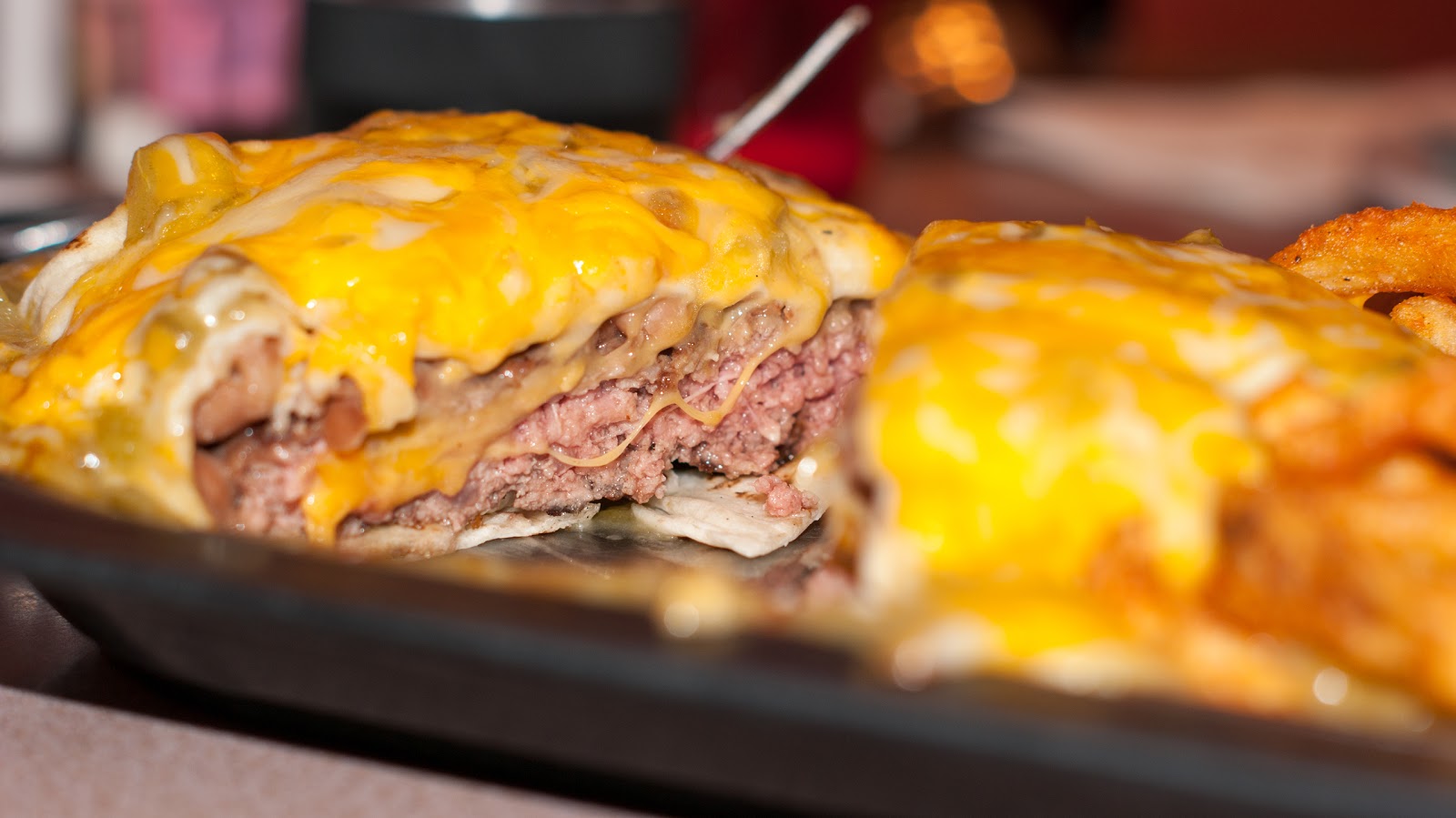 This is the last burger I have on the trip that doesn't have a traditional bun. Whilst I've enjoyed them both, this one especially, I don't see myself trying to recreate this at home. The bun is here to stay.

It was a joy to drive across New Mexico. So many passing drivers gave a nod or a small wave, there was this one driver however....This car was going about 20mph in a 70 limit, but with cars passing on the other side, it wasn't possible to pass, so I flashed, he was now going about 10mph. After about a minute I managed to speed past. When turning to see who was driving, we saw a hand come out of the window, with a gun being spun on his finger. A gun! Pedal to the floor, we didn't see him again. 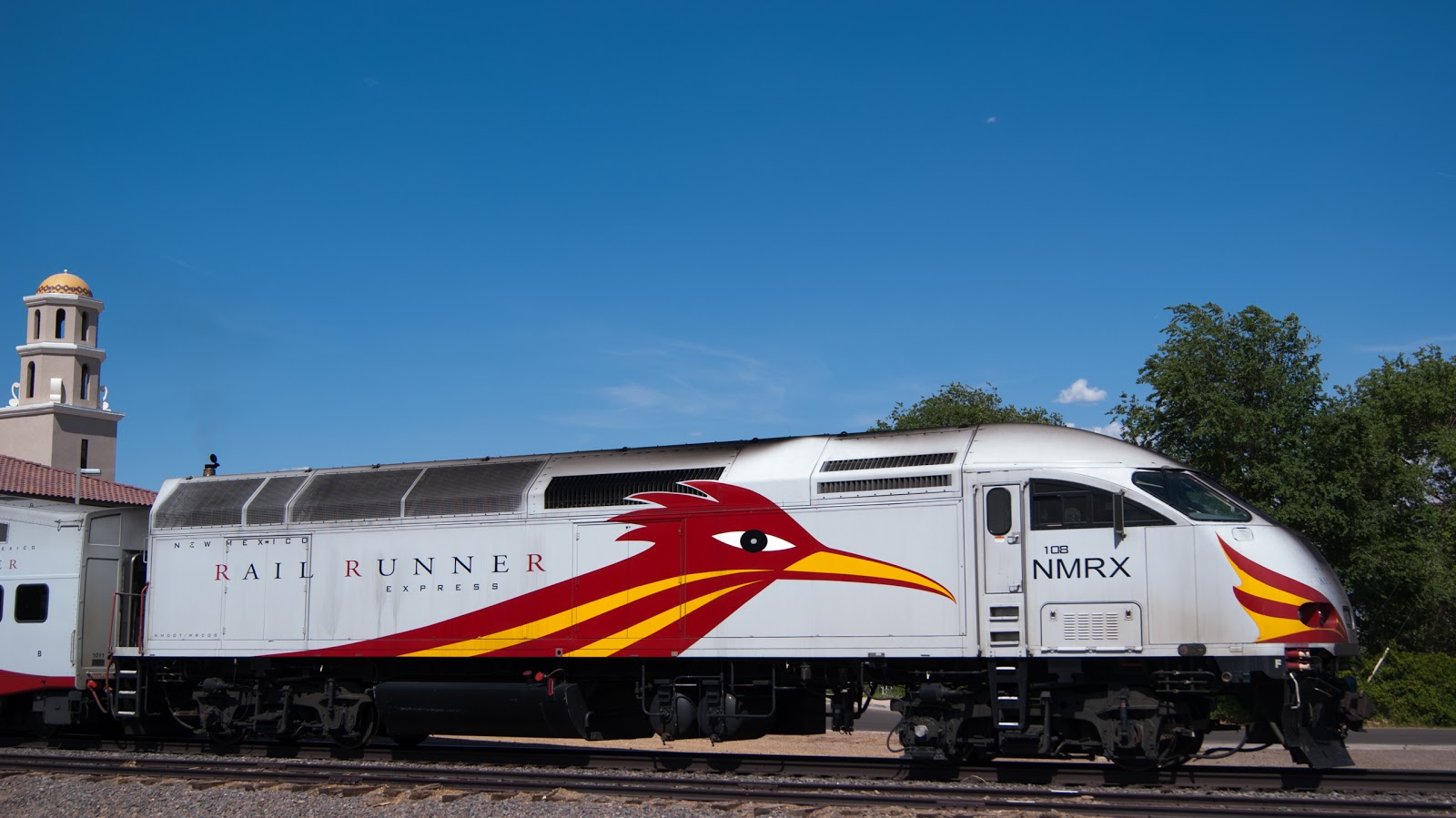 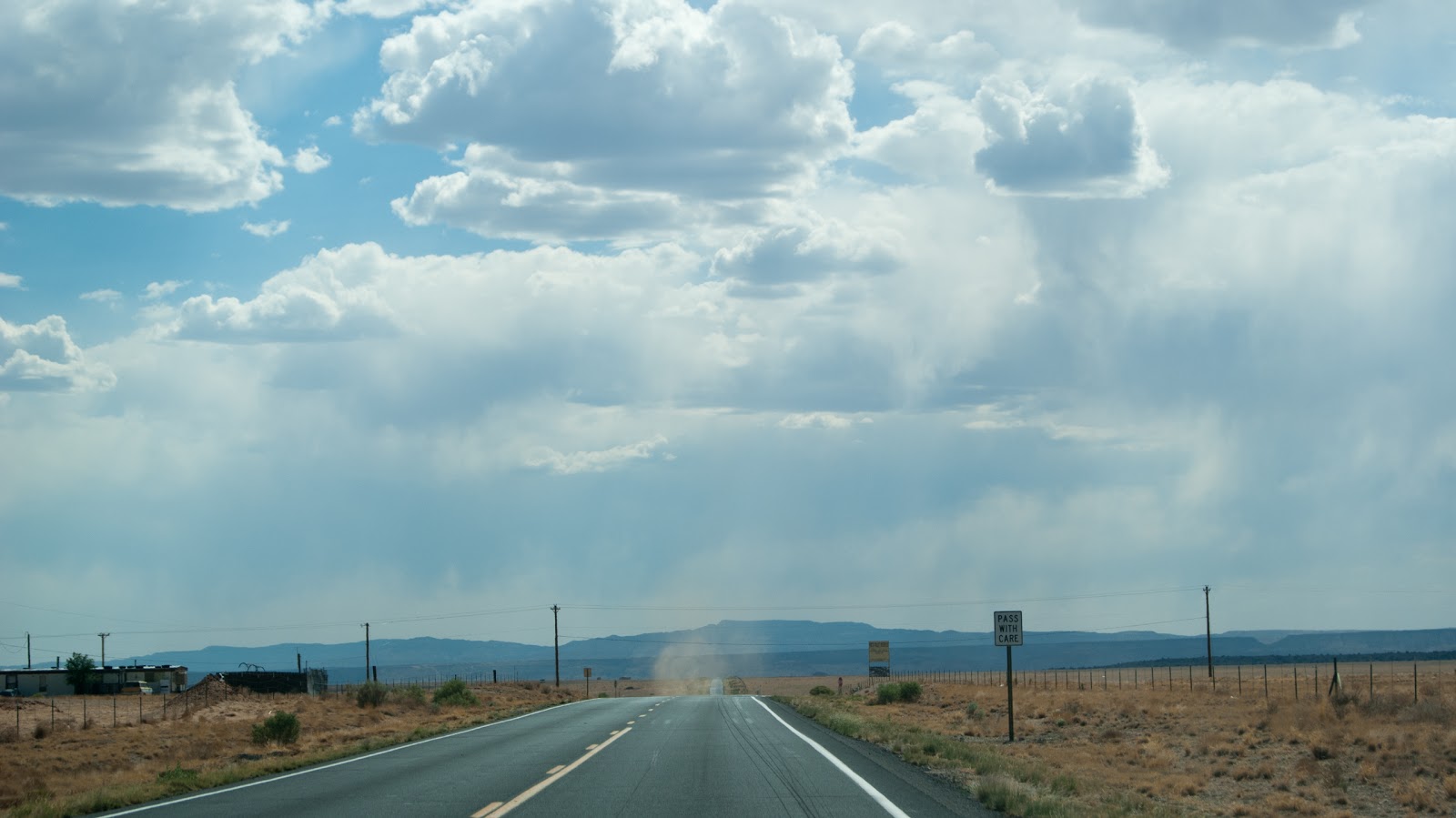 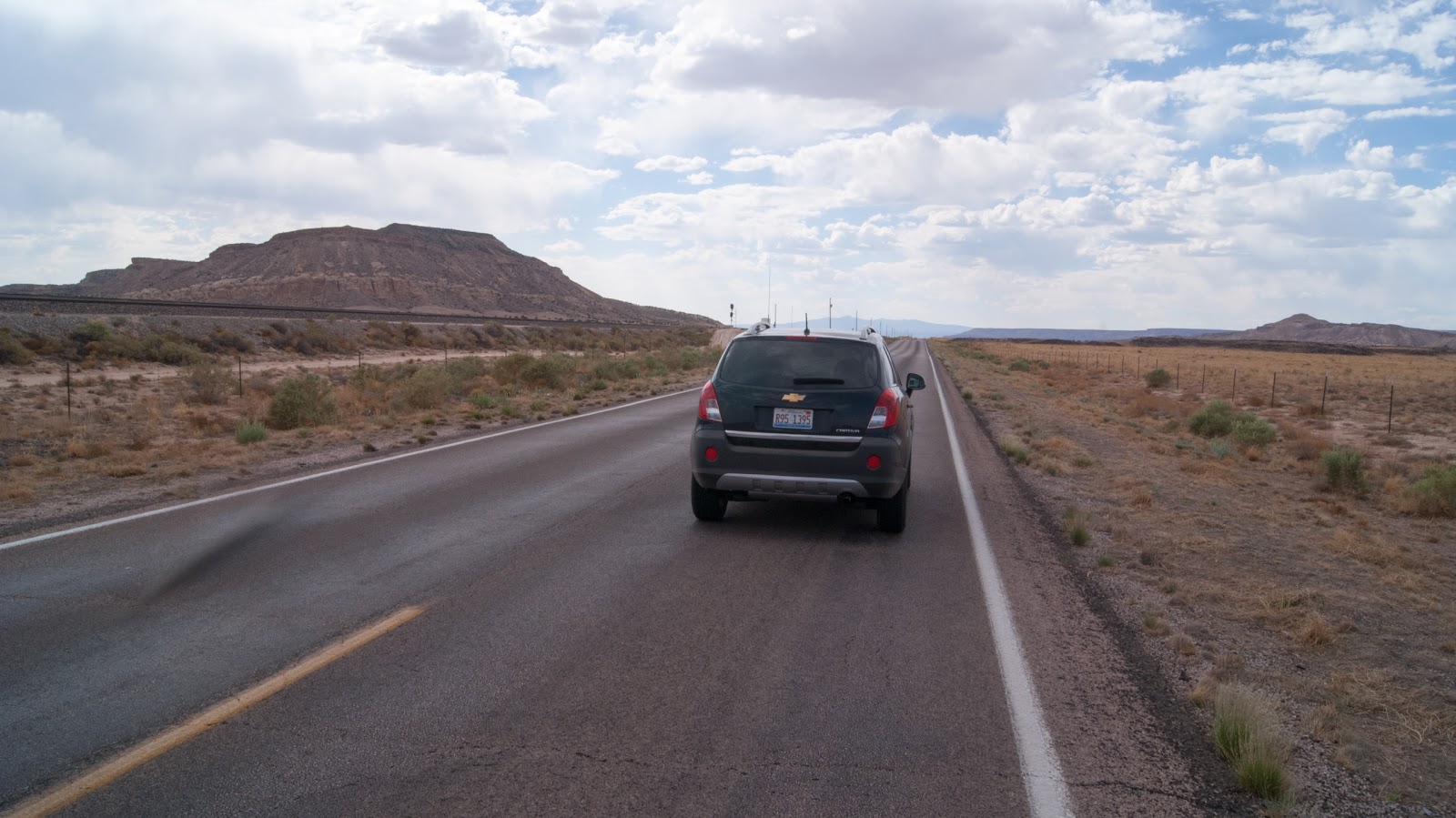 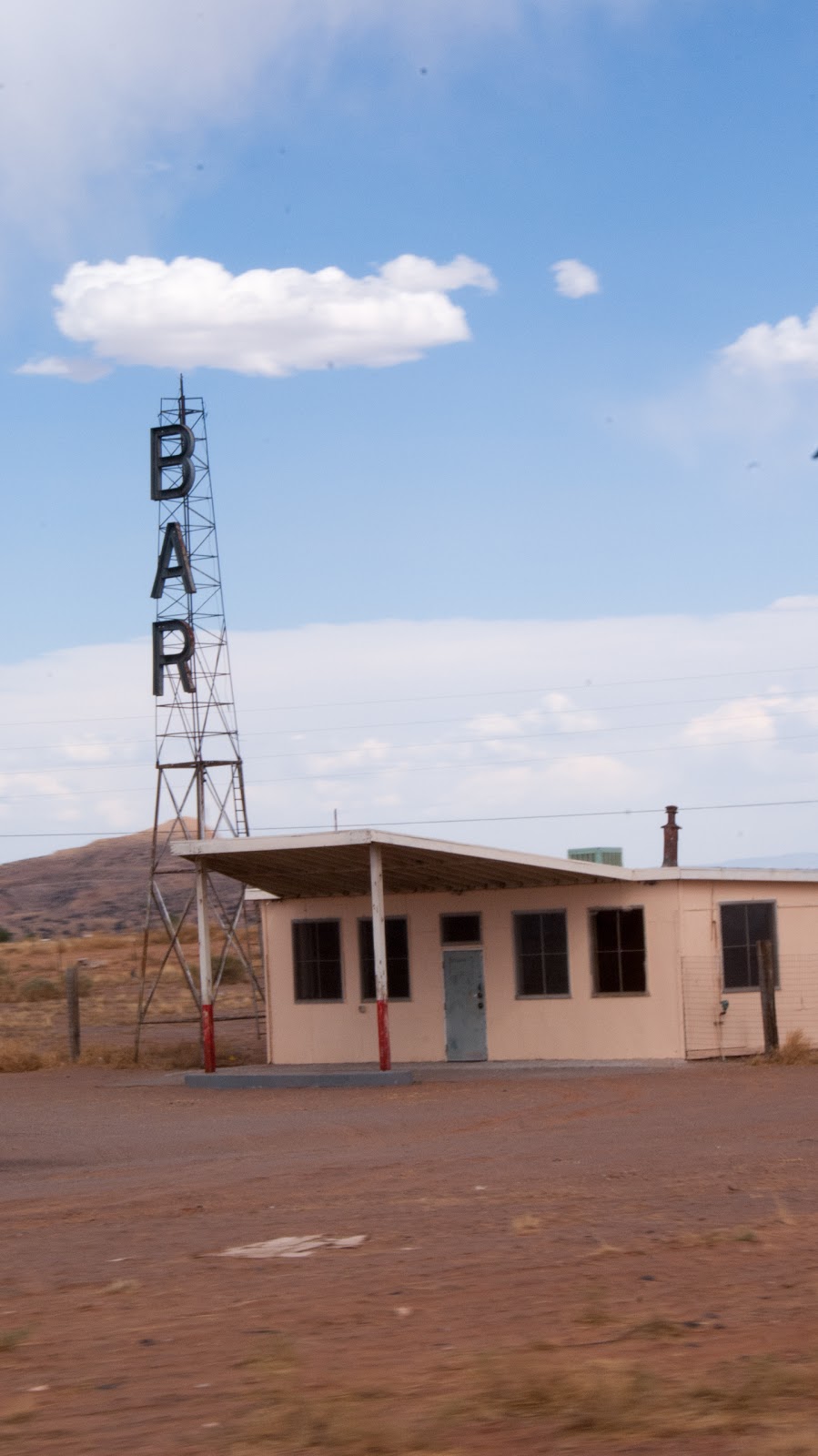 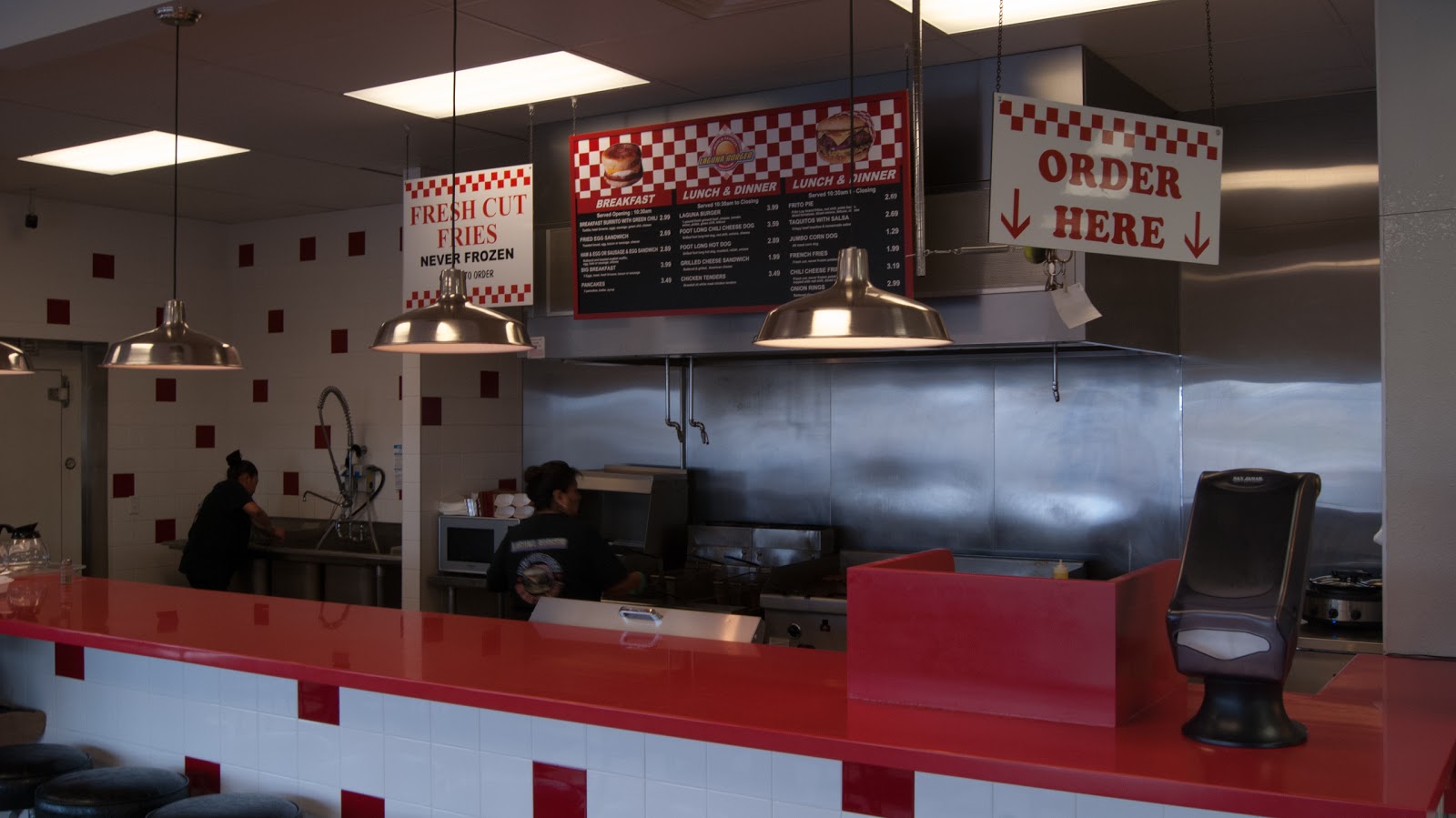 Our journey down Route 66 hit a road block. Due to a religious event we were unable to drive through through a Pueblo, and our new road took us past this 66 pit stop which housed Laguna Burger, and they made burgers fresh to order. Never could I imagine a petrol station back home serving anything other than a microwaved Rustler burger, but this is America.

You don't order at the burger counter. You order and pay, with the gas attendant. Your receipt is then attached to a clip and zip-lined above your head across the shop to the kitchen & to my amazement, the medium rare request had been accepted. Could they deliver it? 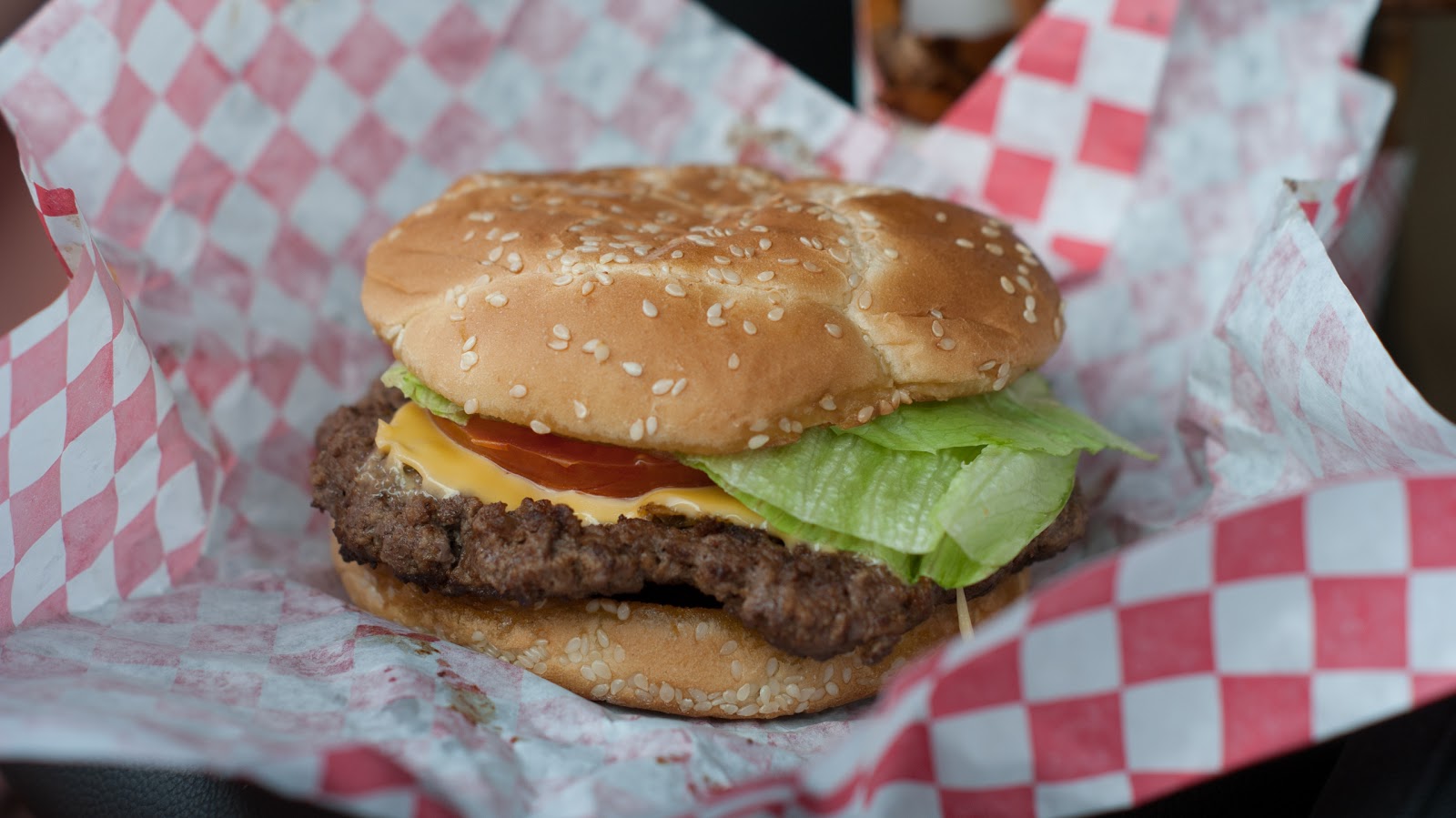 Well not really, but it was still decent. The patty was seasoned well, but had been overcooked, medium well I'd say. It still had a very good flavour and was soft and loose. It's not anything to go OTT about, but much better then the big 2 fast food chains. The bun was a tad tough/dry and towards the end of the burger it did break. The American cheese covered most of the patty and had the classic sticky melt. I missed the chili - It probably wasn't very strong, but hard to tell with a wet tomato and too much lettuce. 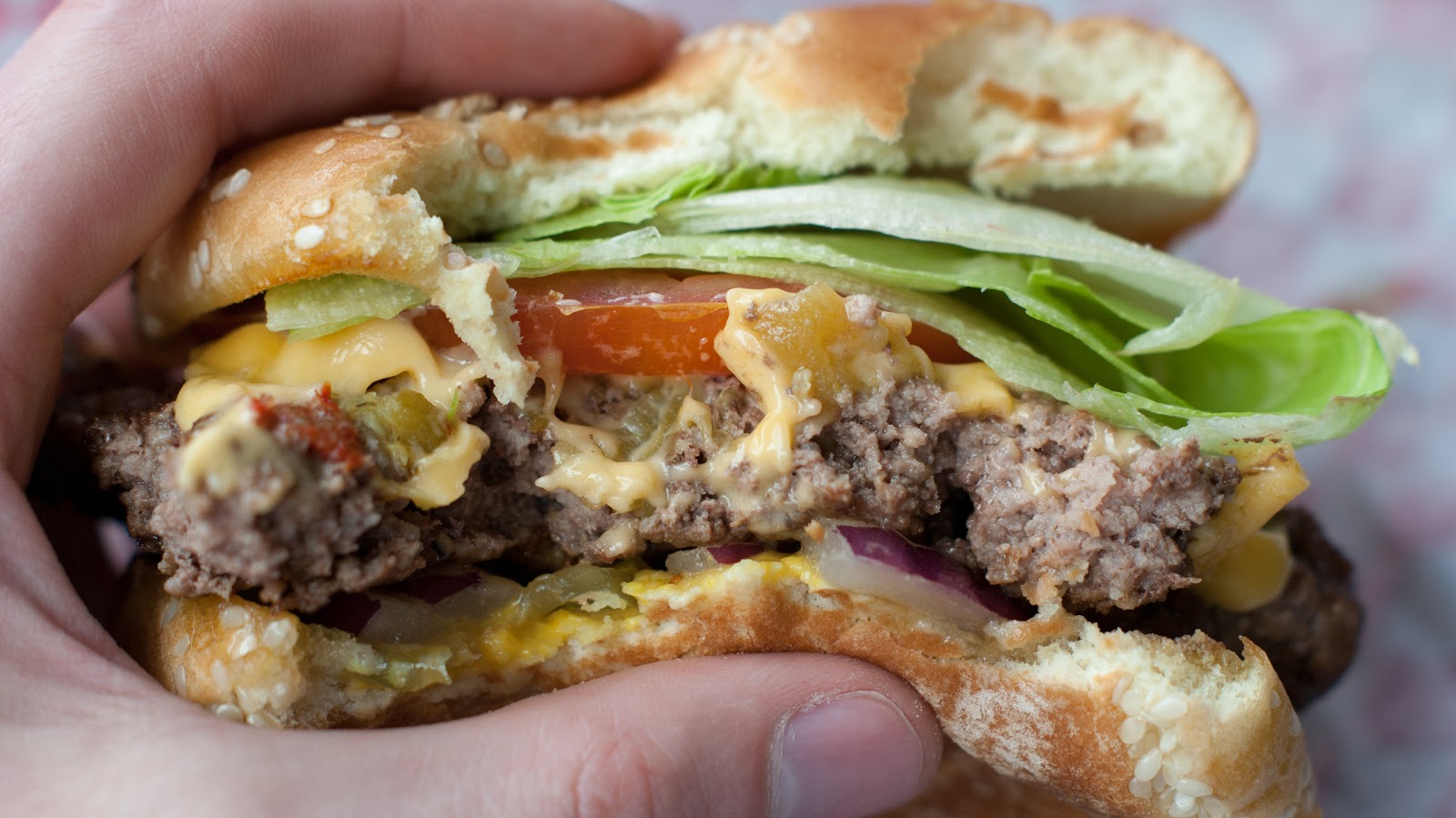 The fries were disgusting. There was no seasoning at all and tasted like they could have been fried in water. 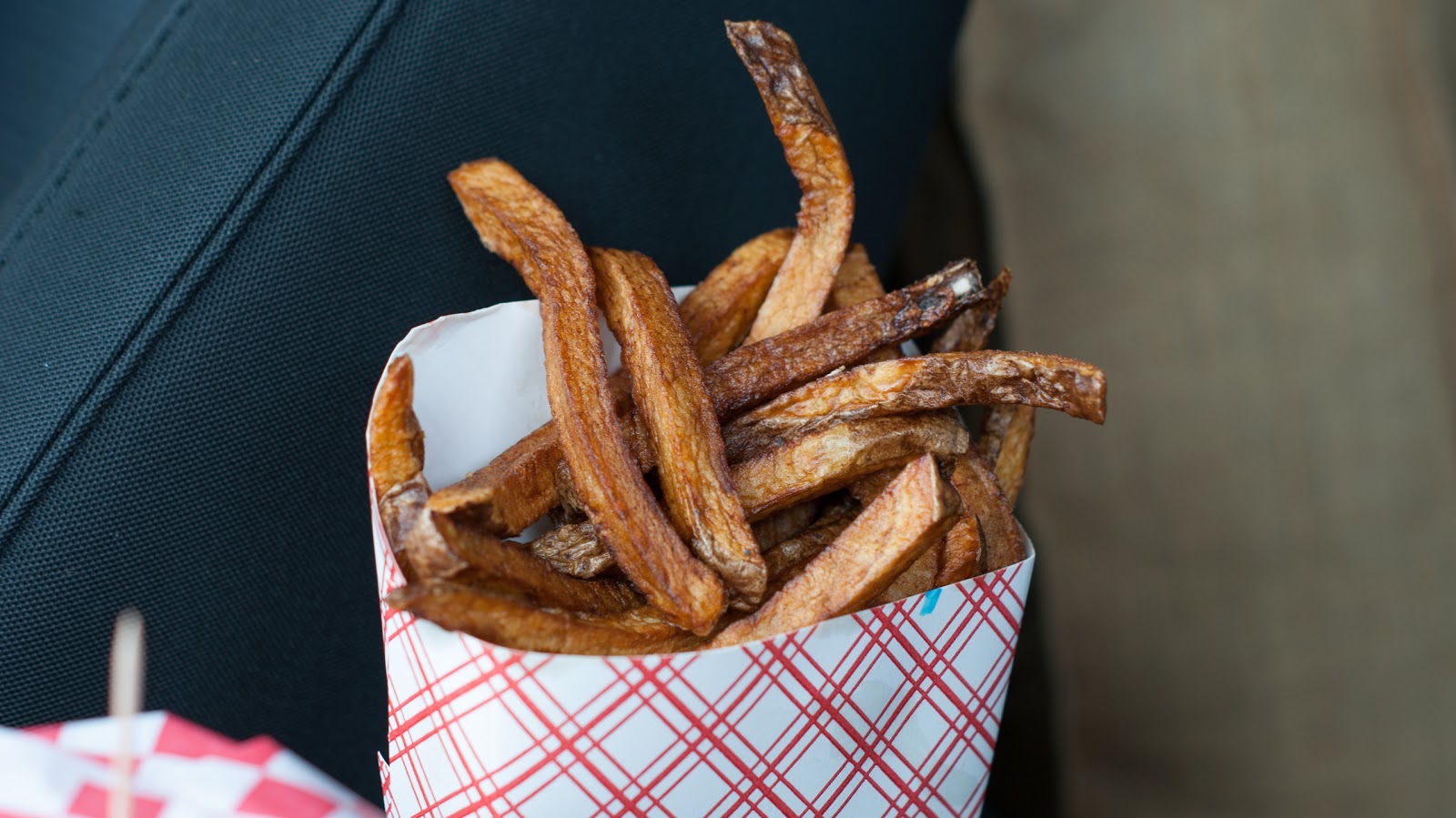 So the burger wasn't one of the best I've had, but it was from inside a patrol station and I think it'll be a long long time before England has anything like this level of burger, in a similar establishment. There isn't much around here, so def worth a cheeky burger if passing - give the fries a miss mind. 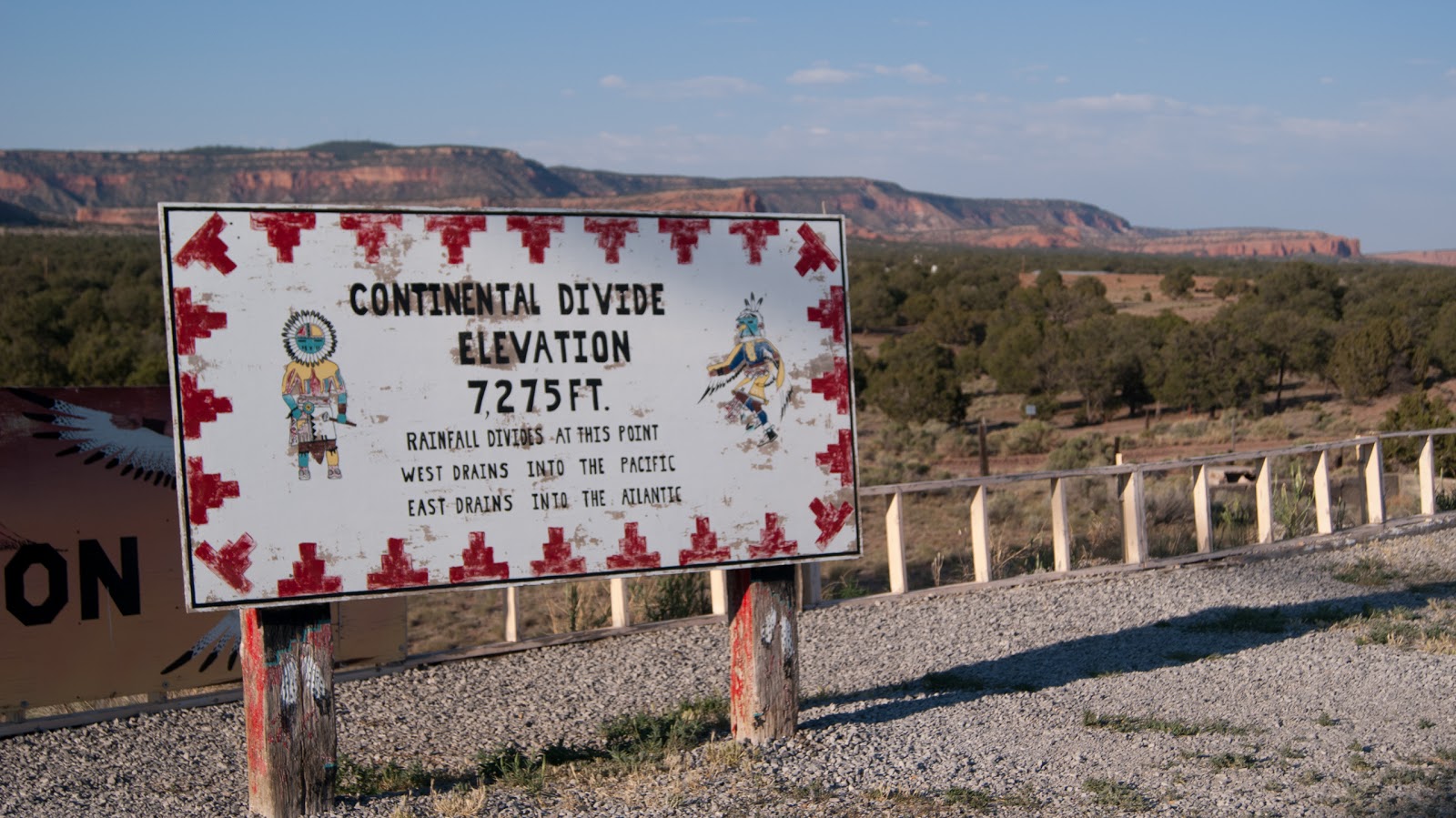 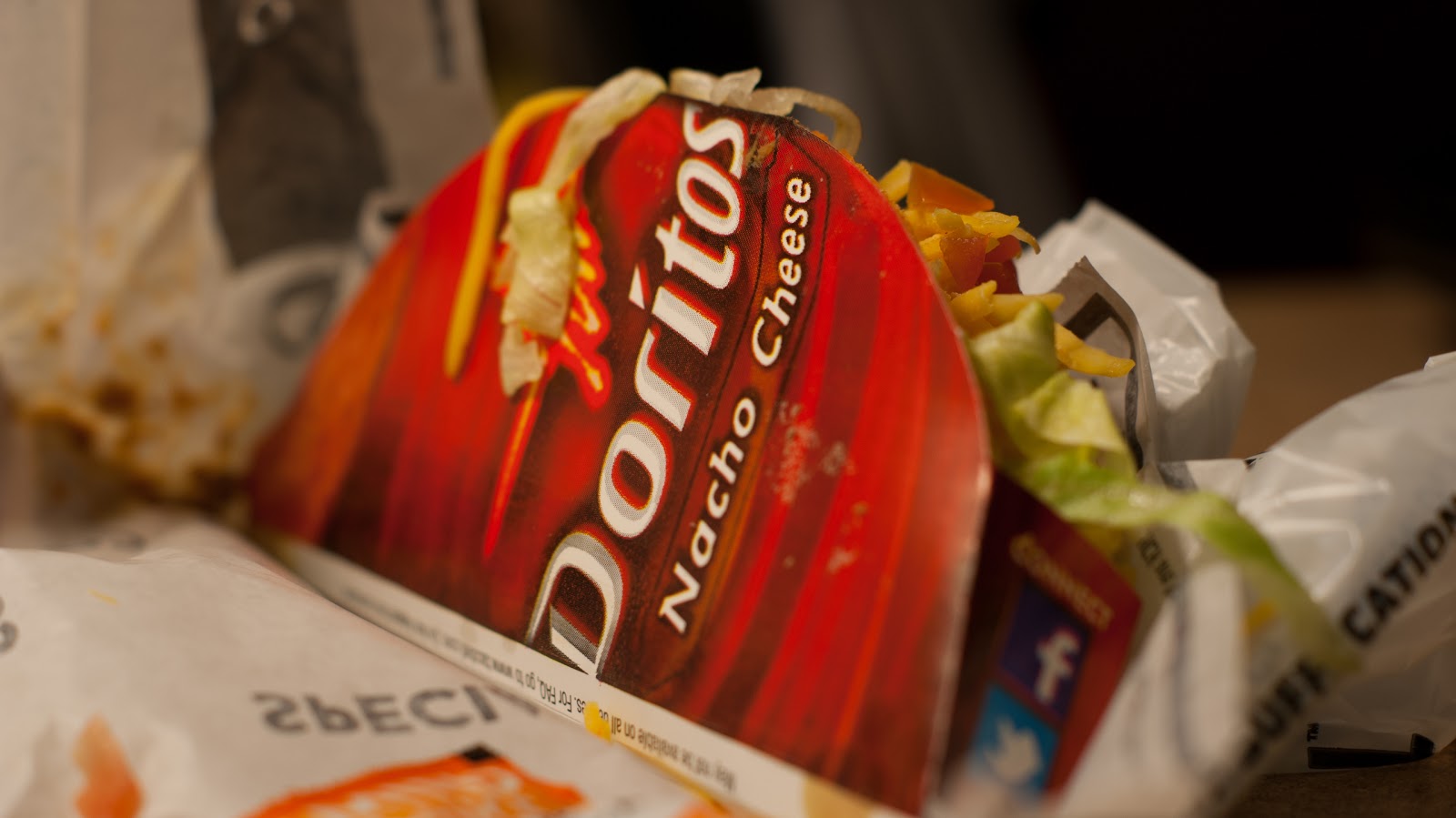 The Doritos Locos Tacos -  sold over 200 million in just 6 months last year. It has transformed Taco Bells fortunes. I don't really see why....It's just a flavoured taco. An oddly shaped Doritos crisp.. You'd have to really love the Nacho Cheese flavour I'd feel to take much enjoyment out of it. Theres not much else in terms of flavour, and the tiniest amount of grainy beef at the bottom wasn't noticeable. The positives are its cheap - but I'd rather get a bag of Doritos and a dip. 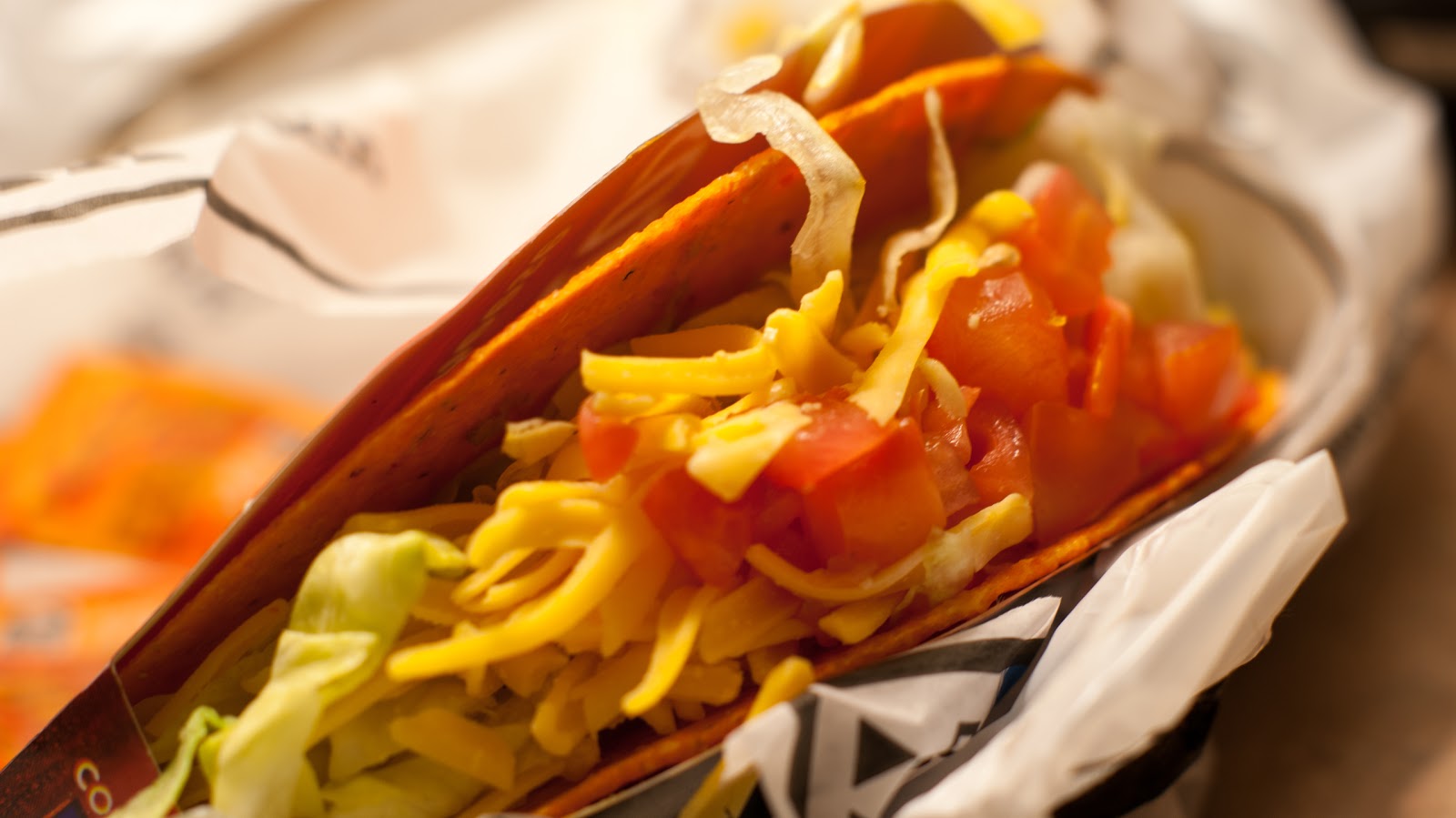 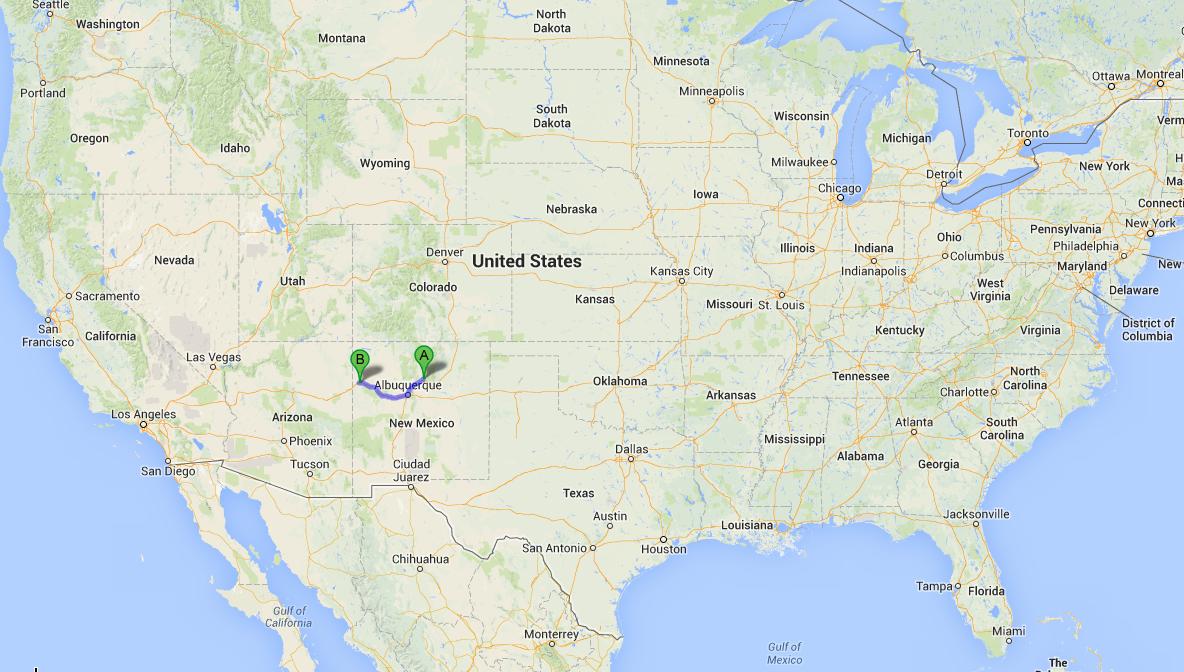