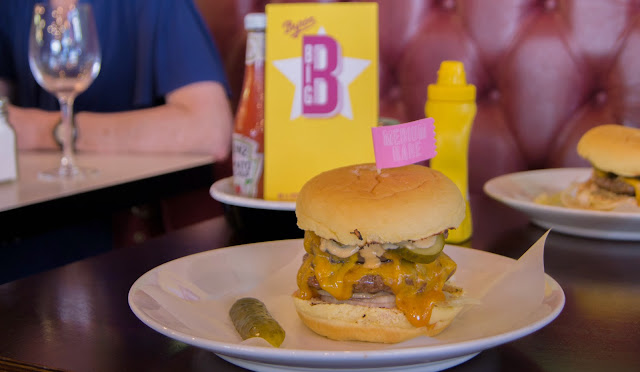 The Big B ended up being a Big D-isappointment

Byron's Tom Byng and their new recruit Fred Smith, went researching burgers in California earlier in the year. 3 days and 30 burgers later and with summer finally here, they've released The Big B.

It's 2x3oz patties, topped with with Red Leicester cheese, onions, pickles and burger sauce sandwiched in a specially made potato bun.

Having spent close to a week in California last month myself, loving nearly all the burgers I had there and being a disciple of Fred Smith I was expecting the Big B to deliver big things. 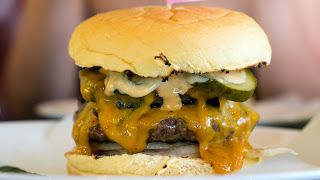 I'm gutted to say that I didn't enjoy this burger. Their Californian special this time last year was majestic, but maybe with the new bun and different sized patties they've lost a bit of the consistency that Byron are known for.

The toppings were individually good, especially the cheese - a golden thick blanket of Red Leicester which came through in every bite. The special burger sauce was reminiscent of the In-N-Out spread, but that's where it ends.

Their new potato bun had a sponge cake like consistency and was too soft to cope with the sauce and juices and just over halfway through broke away, leaving me picking at the rest of the burger. 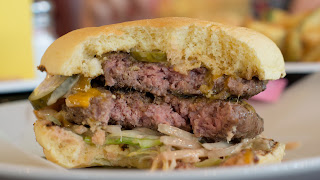 Byron's patties have never disappointed me previously. They'd been cooked as requested every time and been a soft, tasty beef that was a very good quality. Both patties were cooked medium-rare, but my oh my were they tough. I wonder if the patties are over worked when being formed in there new 3oz format, as they have the 6oz spot on. Despite the patties being just 3oz they're quite thick and give the burger an unexpected height.  Mrs Burger Addict had a medium cooked patty and the tough chew made hers inedible. 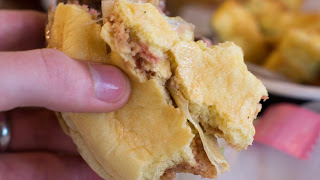 I've seen some good feedback for this burger on twitter so I don't doubt it can be executed well. However, the key to Byron's success has been a few burgers done well, and with a new bun and patty for the kitchen to prepare, maybe it'll just take a bit longer to get right.

Email ThisBlogThis!Share to TwitterShare to FacebookShare to Pinterest
Labels: 4/10, Big B, Byron, London