The test tube burger has its first taste - Frankenburger 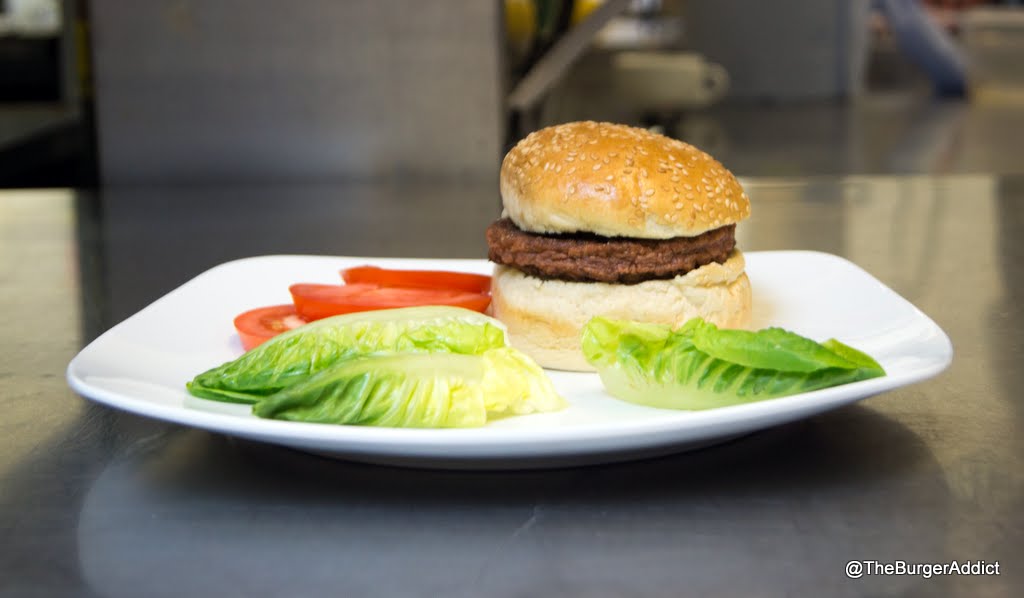 Yesterday lunchtime in the Riverside Studios in Hammersmith London, selections of the world media descended to witness the cooking of the first ever test tube grown beef, cooked as a burger. Somehow I worked my 'charm' with the PR company and got selected to join the heavyweights journalists in the audience. It appeared to be dominated by science reporters rather then foodies, so attempted to give decent updates live on twitter.

The 'show' went live bang on 1pm and a short video was played showing the sustainability issues we face if continuing to consume meat at the current volume, including views from the mystery backer of this project - Google co-founder Sergey Brin! Professor Post was joined by his two tasters. Hanni Rützler, a health food trend researcher from Austria and Josh Schonwald a food writer from America. Being from America I assumed he'd knows a good burger. The chef was Richard McGeown of Couch's Great House Restaurant in Cornwall. With respect to chef McGeown, it was quite disappointing to not see the rumoured Heston on the stove for this collision of science and food. 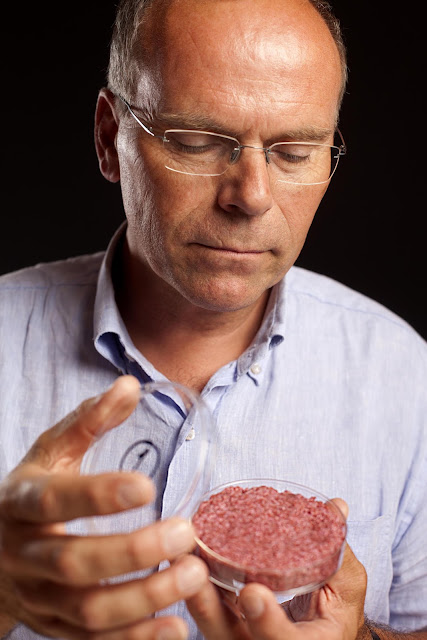 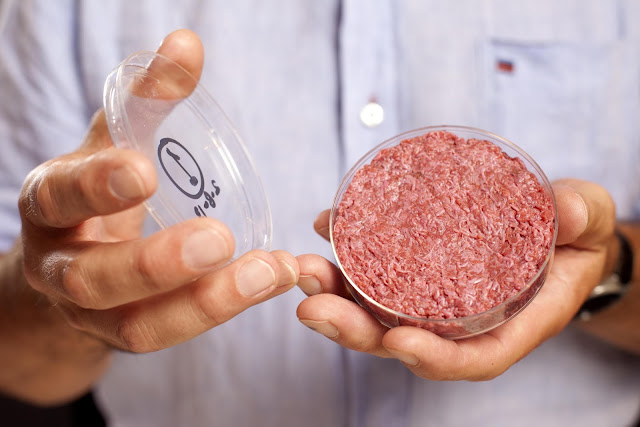 The burger was still inside a lab dish when handed to McGeown. There was a few odd things that happened in the cooking process. The pan had only been on the heat seconds before sunflower oil was in followed by the burger. No seasoning used and there was no sizzle when it hit the pan. Chef then added butter and waited about 2 minutes before flipping. Butter was added, then some butter, some more butter LOTS MORE BUTTER! It was swimming in butter by the end of it. I asked him why he didn't use any seasoning and he said "Not to taint the flavour, so that the panel could accurately taste its resemblance to traditionally produced beef." Not sure why half a block of butter was used then... 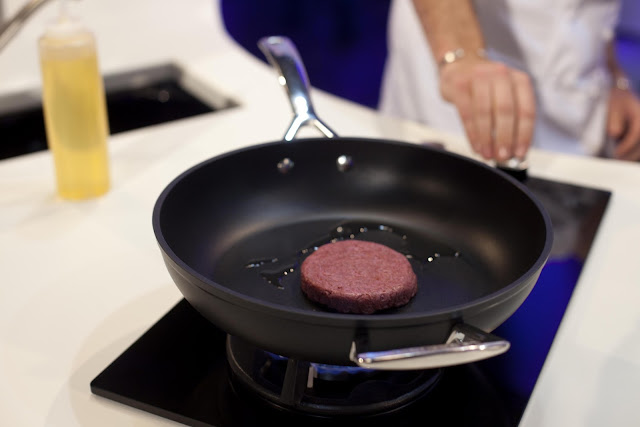 This was a 0% fat content burger. Not the ideal 80/20% ratio advised. Post said it would be at least a few months before they could add fat to the beef strands. 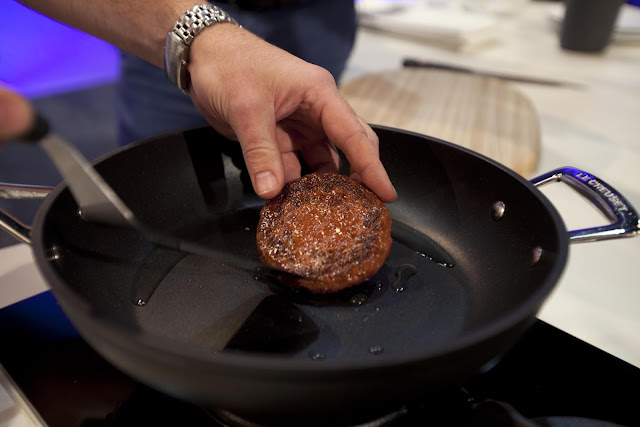 While cooking he prepared some chopped tomato, lettuce and the bun. It was then dished up as just a patty with the rest purely decoration for the plate. I don’t understand the reason to have a horrid, supermarket looking style bun, overly thick cut tomatoes and lettuce next to it on the plate. 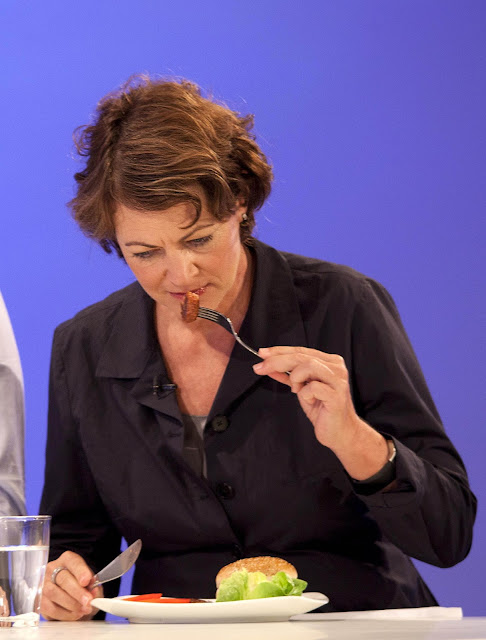 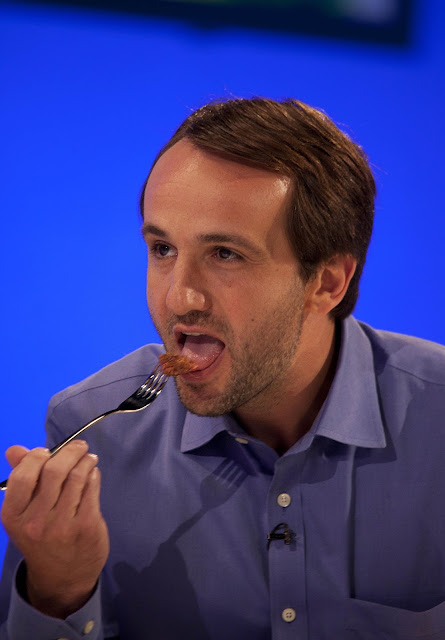 Eaten with a knife and folk the testers and Prof. Post had a bite or two each, with the testers giving their expert opinions. "Some flavour with the browning" "It's close to meat" "The mouth feel" "It was very hot"

From what I could tell from their reaction the burger didn't taste great. They couldn't finish a 5oz patty between 3 of them after all. They left around half of the patty uneaten. That's about £125k on a plate, and despite the pleas from the audience they wouldn't let anyone else try it, despite us all agreeing we'd be happy for anyone random to taste it. It looked very pale and looked like overly minced mush.

I had my hand up for a question but sadly I didn't get picked. The highlight of the Q&A was most certainly "Can this process be used for any animal. Could you make a burger from a tiger or penguin?" The answer was yes, although Post won't be looking into it for now.

The BBC managed to get exclusive access to 'a burger' in the studios kitchen. I managed to walk in and join them unnoticed and take some pictures of Pallab Ghosh filming and a close up of 'a burger'. 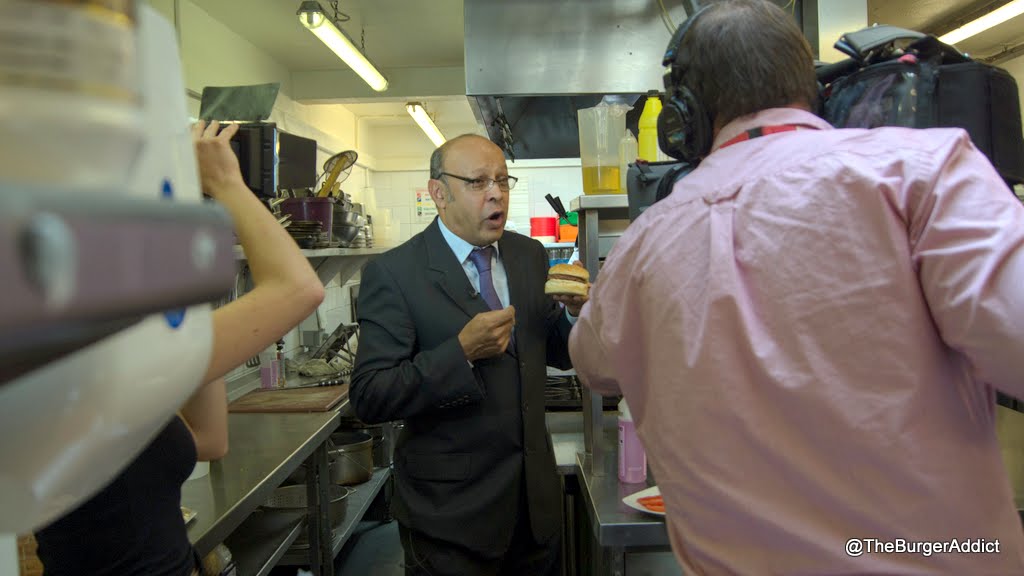 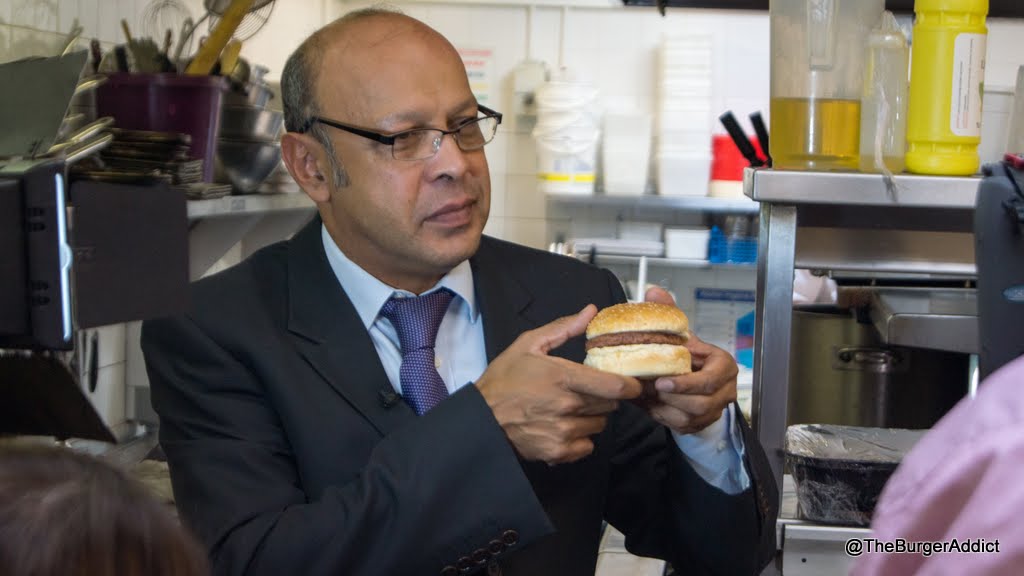 It was a great experience, something I'll probably never get the chance to do again and an event that was really well organised. Thanks to all. Thanks also to Owen from www.foodoverlondon.com for his help on my preview piece.

Today wasn't really about taste however, it was about a science and a concept. With the sustainability issues we almost certainly have in the future, hopefully the main thing we can take from today is that we need to take greater care of where we buy our meat. Get to know your butcher and where your meat has come from. Hopefully we can continue being traditional carnivores for some time yet.